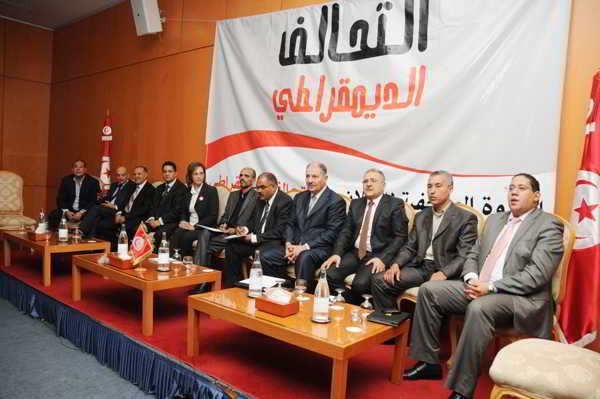 A coalition of Tunisian opposition parties intends to propose next week a cabinet of independents to end the political crisis shaking the country, one of their number said Saturday.

“The National Salvation Front will continue to work toward a government of national salvation and make its proposals on independent figures to constitute it next week,” said Karima Souid, from the Massar party.

“The front will also set out a precise road map,” she added.

The front is a mixed bag of parties running from the extreme left to the centre-right that is demanding that the Islamist-led government of Prime Minister Ali Larayedh step down.

His killing was followed by the murder on July 25 of another opposition figure, Mohamed Brahmi.

The murders have been blamed on radical Islamists, and the cabinet has been accused of not doing enough to prevent such killings.

The opposition has rejected talks with the government until it steps down, while the Ennahda party that heads the coalition has ruled out any dialogue conditional on its ouster.

But Souid said there “can be no discussion until a government of national salvation is put in place. That is non-negotiable.”

Larayedh has refused to resign, and vowed Thursday that his cabinet will make every effort to turn to dialogue with its critics to resolve the crisis.

“Dialogue is the best way to overcome difficulties and resolve current problems,” he said in a message for the start of Eid al-Fitr, the holiday marking the end of the Muslim fasting month of Ramadan.

It was his first reaction to Tuesday’s suspension of the work of the elected National Constituent Assembly pending negotiations between the opposition and the government.

Assembly speaker Mustapha Ben Jaafar has proposed that the powerful UGTT trade unions organisation, which has called for a government of technocrats, mediate talks between the cabinet and opposition.

Since its 2011 election, the assembly has failed to hammer out a consensus on a new constitution following a revolution that ousted long-time president Zine El Abidine Ben Ali earlier the same year.

The suspension of the assembly throws into question Larayedh’s target of adopting a new constitution and electoral law by October 23 ahead of a proposed December 17 election.