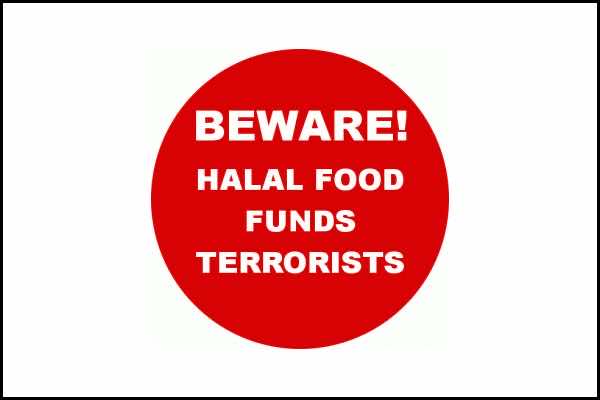 ‘Beware! Halal Food Funds Terrorists’’ Caused outrage among the Muslim community in Australia, whose members accused some right-wing groups of spreading baseless misconceptions about the Islam and its teachings.

The stickers sold by a Sunshine Coast One Nation and linking Halal food with terrorism, were designed to inflame racial discrimination.

The One Nation candidate Stephanie Banister is facing criminal charges after allegedly placing anti-Muslim stickers, like “Halal food funds terrorism”, on Nestle products in a supermarket at Underwood, south of Brisbane.

In an interview with Seven News, Stephanie Banister made multiple blunders as she referred to Islam as a country, claiming that 2 per cent of Australians “follow haram” – an apparent reference to the Quran. She also described the national disability insurance program, which will not begin until after 2016, as a policy that was “working at the moment”.

“I don’t oppose Islam as a country, but I do feel that their laws should not be welcome here in Australia,” Ms Banister told Seven News.

The Australian Multicultural Affairs Minister, Glen Elmes, from the Liberal National Party, condemned the campaign as “offensive, grotesque and designed to inflame hatred”.

“People are encouraged to put the stickers on food products in supermarkets, which is not just racial discrimination, it’s also vandalism,” Mr Elmes was quoted by Brisbanetimes.com as saying.

“Queensland is home to 37,000 people of the Muslim faith and they should be free to practice their religious and cultural beliefs without attack from idiots like the One Nation candidate for Fairfax,” the minister added.

“we are speechless, what do we say about this,” Islamic Council of Queensland president Mohammed Yusuf told Seven News on Wednesday, July 24.

“There is so much misconception about Halal… it is a simple question of us meeting our religious rights, just like the Jewish community.”

With the rise of Muslim communities in non-Muslim areas, the concept of halal, meaning permissible in Arabic, is increasingly being applied to food.

According to AFP, Australia’s anti-immigration One Nation party, Stephanie Banister, dropped out of the election race Saturday after “a blundering interview in which she referred to Islam as a country.”