Tangier - No sooner had FC Barcelona player Lionel Messi paid a visit to Israel in a bid to promote peace in Israel on July 31 than his Moroccan fans expressed their disappointment, writing insulting remarks about his visit via social media. 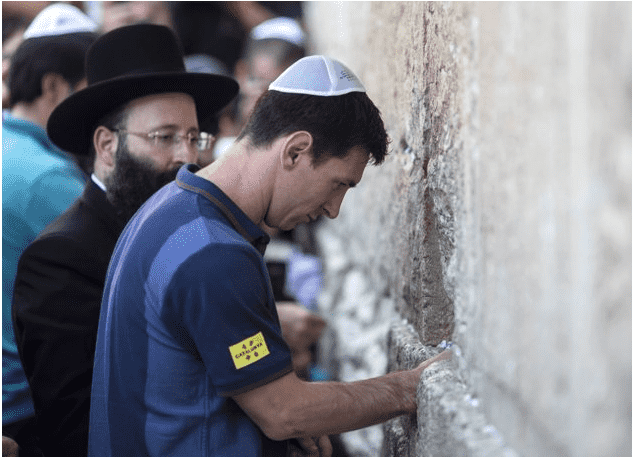 Tangier – No sooner had FC Barcelona player Lionel Messi paid a visit to Israel in a bid to promote peace in Israel on July 31 than his Moroccan fans expressed their disappointment, writing insulting remarks about his visit via social media.

According to the daily newspaper Al Akhbar, Messi’s reputation in Morocco has suffered after a picture showing him before the Wailing Wall went viral on Facebook. Messi’s picture, showing him tilting his head towards the Wailing Wall, has sparked controversy through social media, notably from Muslims in the Arab world.

As many Muslim fans of Messi have criticized him for “supporting Zionism and empathizing with Zionists,” the FC Barcelona team tried to silence fans’ fury by visiting Palestinian Al Khalil city to denounce the presence of Palestinian prisoners in Israeli prisons.

“Lionel Messi is damaging his reputation in Morocco, especially now that he has visited and stood by the Wailing Wall in Israel” A Barcelona fan from Tangier told MWN.

“We are very fond of Messi. But, his visit to Israel implies that he is against the Palestinian cause” another fan said.

Lionel Messi’s personal page has received critical remarks in the recent past, according to Al Akhbar. “FC Barcelona’s policy is not innocent,” one commenter remarked in response to Messi’s photo.

According to FC Barcelona, the goals behind Messi’s visit to Israel are to strengthen Israeli-Palestinian ties, to encourage peace, and to promote communication.

“Through education and sports, we will succeed in reaching these objectives sooner or later,” Messi’s teammates told Israel National News.