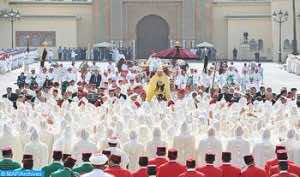 In the beginning of this ceremony, Interior Minister Mohand Laenser in addition to  Governors of the kingdom’s prefectures and provinces, swore allegiance to the King.

Afterwards, delegations representing different regions, prefectures and provinces of the Kingdom renewed allegiance to the Monarch.

The allegiance or “Baiaa”, a centuries-old pact binding the Throne and the people, is a mutual commitment whereby the people pledge loyalty to the King and the King pledges to defend the independence, sovereignty and integrity of the country, to preserve the citizens’ rights and to see to the prosperity and progress of the nation.

The ceremony took place in the presence of the Head of government, Speakers of the two houses of parliament, the King’s advisers, cabinet members, high commissioners, chairmen of constitutional bodies, president of the Royal advisory council for Sahara affairs, heads of Royal cabinets, high military officers, General Director of the national police, and other civil and military figures.