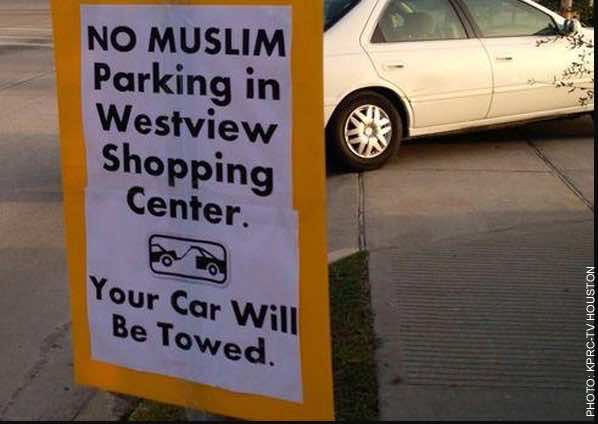 Pamela Geller, co-founder of AFDI, has played a large role in the continued explicit hostility toward Muslims in the U.S.

Last Thursday another similar incident of discrimination and hostility toward Muslims emerged.

Lined along the street next to El Farouq Mosque in Houston, a number of signs read, “No Muslim parking in the Westview Shopping Center. Your car will be towed.”

According to news outlet Click2Houston, many members of the mosque park their cars in the shopping center’s lot.

As the number of cars was expected to drastically increase with the end of Ramadan touching near, the signs abruptly appeared to keep Muslims away from parking. Many have been offended.

“I’m very shocked because we do live in a society that’s supposed to be very accepting and this is what we all preach,” said Yara Aboshady, as quoted by Click2Houston.

“That we all have the freedom of religion.” While instances of discrimination against Muslims persist in a nation as multicultural as the United States, other instances of anti-Islam attitudes simultaneously surge in other corners of the world.

One of MWN’s recent articles shows how controversial stickers sold by Sunshine Coast One Nation in Australia established a link between “Muslim Halal food” and terrorism, thus serving about the same objective as New York subway’s anti-Islam adds.