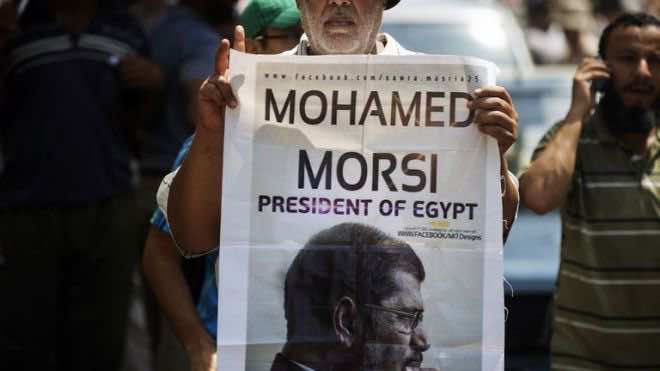 Supporters of ousted Egyptian president Mohamed Morsi called more rallies for Sunday to demand his reinstatement, amid last ditch efforts for reconciliation ahead of a threatened crackdown on protests.

Morsi loyalists, led by the Muslim Brotherhood, have kept up two huge protest camps in Cairo to protest against the Islamist president’s ouster by the military on July 3.

They say nothing short of his reinstatement will persuade them to disperse, despite several warnings by the interim leaders that the camps will be dismantled after the Eid al-Fitr holiday which was to end on Sunday.

In a sign of the mounting tensions, a brief overnight power cut at the main sit-in outside the Rabaa al-Adawiya mosque struck panic among the pro-Morsi demonstrators, with some taking to social media to announce the assault had begun.

Protest organisers told AFP that as the electricity went out, they reinforced their barricades, added sandbags to the entrances of the protest site, and sent volunteers to find out what was happening, only to be told it was a false alarm.

The main coalition of Morsi supporters, the Anti-Coup Alliance, said 10 marches would take off from various parts of the capital on Sunday “to defend the electoral legitimacy” of Egypt’s first freely elected president.

The call for fresh rallies comes as Al-Azhar, Sunni Islam’s highest seat of learning, called for reconciliation talks in the latest of a string of attempts to find a peaceful solution to the political deadlock.

Al-Azhar’s Grand Imam, Ahmed al-Tayyeb, is to begin contacts with political factions on Monday aimed at convincing them to sit down to talks later this week, state media reported.

“Al-Azhar has been studying all the proposals for reconciliation put forward by political and intellectual figures… to come up with a compromise formula for all Egyptians,” Tayyeb’s adviser, Mahmud Azab, told the state-owned Al-Ahram newspaper.

But the Muslim Brotherhood is unlikely to accept such an invitation after Al-Azhar sided with the military over Morsi’s ouster.

Tayyeb appeared with army chief Abdel Fattah al-Sisi when he announced on July 3 that Morsi had been deposed and laid out a political roadmap for Egypt’s transition which provides for new elections in 2014.

Morsi’s turbulent single year in power polarised Egyptians and his ouster by the military only deepened divisions.

The Islamist leader was widely criticised for concentrating power in the hands of the Muslim Brotherhood. Under his tenure, Egypt saw political divisions spill out onto the streets in deadly clashes, as the economy tumbled.

On June 30, millions took to the streets to demand Morsi’s ouster, openly calling on the army to remove him.

Senior US, EU and Arab envoys flew into Cairo in recent weeks to try to persuade the two sides to find a peaceful way out of the crisis.

But the government vowed on Wednesday to clear the Islamist protest camps, saying foreign mediation had failed.

More than 250 people have been killed in clashes since Morsi’s ouster by the military, following days of mass rallies demanding his resignation.

The government had already ordered police to end the pro-Morsi protests, which it described as a “national security threat.”