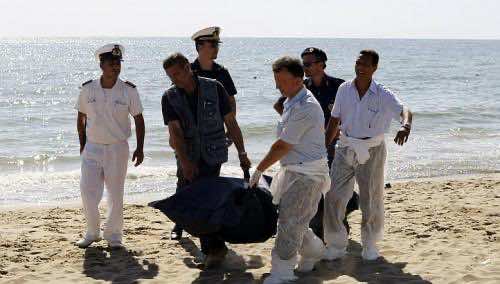 The six migrants who drowned off a tourist beach in Sicily were Egyptians after their boat was abandoned at sea by a larger vessel, Italian media reported Sunday, citing investigators.

The six victims who jumped from a fishing boat on Saturday thinking they had arrived onshore were identified as between 17 and 27 years of age.

A boat illegally transporting nearly 100 migrants had hit a sandbar about 15 metres (50 feet) from the shore, and some of them managed to swim to the beach. Others were rescued by the Italian coastguard.

Investigators believe that the boat was transporting more than 100 passengers, mostly Syrians and some Egyptians, of whom 94 were accounted for on Sunday. Three smugglers escaped by jumping into the sea, according to media reports.

The old wooden boat carrying the migrants had been towed by a “larger ship” and abandoned off the coast of Catania in eastern Sicily, according to police.

Italian Foreign Minister Emma Bonino told local radio Sunday there was “no miracle solution” to the influx of immigrants from war-torn and poverty-stricken countries in the Middle East and Africa, and said Italy was “not the dreams of these immigrants.”

The southern European country was instead “a country of transit,” she added, emphasising the difficulty of preventing such incidents.

“The southern borders of Libya are out of control and harbour Sudanese, Nigerians and many others,” she said.

Syrians travelled through Lebanon and then Egypt, and since the war in Iraq immigrants passed through Turkey and ended up in Greece, Italy and Spain, “the countries suffering the heaviest burden,” she added.

Two Egyptians aged 16 and 17 were also questioned by police, believed to have been responsible for distributing food onboard the vessel, according to prosecutors.

The prosecutor of Catania, Giovanni Salvi, opened an investigation into incitement to illegal immigration and possible multiple homicide on Saturday.

To enter unnoticed to a city the size of Catania, “they were probably transferred at night from a larger vessel or they would have been spotted earlier,” he told the Catholic newspaper L’Avvenire.

This implied the existence of an “organised network,” including possible links with the Sicilian Mafia, he said.

Another vessel carrying 80 Egyptians and Syrians ran into trouble in Calabria, southern Italy Sunday but managed to pull away from a sandbank without any injuries, the fifth boat of migrants in the region in the last two weeks.