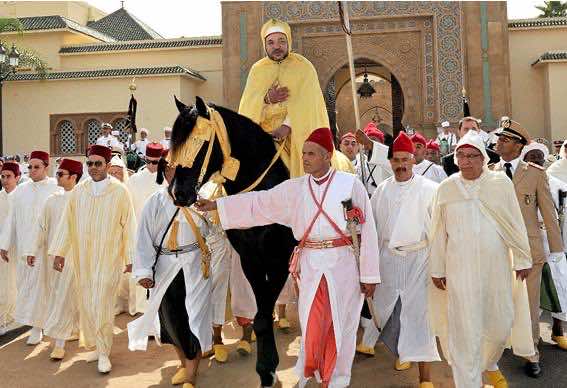 There is no doubt that Morocco has been experiencing in recent months an unprecedented political crisis? which is still relatively contained, but could turn into a drama at any given moment. Between an opposition still within the power, people’s indignation on how events have been developing and unrest in neighboring countries, the political and social situations in the Cherifian Kingdom look tense and can drag the country to instability.

A quick analysis of the recent events, more notably the royal pardon granted to the Spanish pedophile Mr. Daniel Galvan, the withdrawal of the “Independence Party” ministers from the governmental coalition, and the uncertain economic future will all push for this question: Is the King of Morocco and the country’s stability in danger?

King Mohammed VI, so far, has been a very popular monarch. He was most successful in his dealings with a series of crisis potentially difficult, unlike many Arab leaders who fell once the wrath of people hit the streets during the Arab Spring of 2011. But due to the latest recent events, the tide is turning, or that what it seems like.

Thousands of people protested outside the parliament in Rabat and other cities in Morocco, against the pardon granted to the Spanish pedophile Daniel Galvan. Those protests were violently repressed by the police and security forces, which added insult to injury, while no official statement was issued by the government to determine those responsible of ordering the use of force against peaceful protests. However, the ruthlessness of the police did not prevent many Moroccans to take the streets in huge numbers in Casablanca and other cities.

Although the king rescinded his official pardon and the Spanish pedophile was detained again days after he arrived in Spain, the anger of Moroccans rumbles again. But why? The people called for greater transparency in politics, a truly independent judiciary system, free from influences, to name those responsible for this huge mistake and bring them to justice, as this “mistake” touches the dignity and the pride of Moroccans, especially that it is related to children.

Is King Mohammed VI on a shaky throne?

Undoubtedly, many entities, both domestically, regionally and internationally, tend to taint the name of King Mohammed VI, and this was expected due to those who cannot wait to exploit a scandal in an attempt to drag Morocco to join the “Arab Spring”.

Certainly, the royal palace was loud and clear that “his majesty knew nothing” about anything. The king rescinded his royal grace, which was considered a highly exceptional measure. The sovereign dismissed the director of the prison administration as the sole responsible for failing to revise the list of pardon before it was presented to the Royal cabinet. He was also quick to express his “compassion” for and “empathy” with the families of victims, and even invited them to the Royal palace to show his solidarity with them. But many claim that all it remains, following the scandal, is the sacred figure of the monarch which, they believe, is partially desecrated.

Hypothetically speaking, behind the Galvan case, there is a crisis of different magnitude that is emerging, and it is coming at the worst and difficult time. The withdrawal of the “Independence Party” ministers from the governmental coalition, and the backdrop of economics are not helping the whole situation either. Add to this the policies of the palace which have been heavily criticized by many observers.

All these factors surely put the monarch in the worst position. King Mohammed VI has made every effort to have a smooth relationship with the Islamists in power, and it seemed that Morocco would continue enjoying its political and social stability. But the decision of the leader of the ‘Independence Party” to withdraw the party’s ministers from the government was a cowardly political move to destabilize the government and enforce an early elections, hoping that his party will win the majority of votes to form a government. When doing so, little he knew that he dragged the palace and Morocco to a very grey political and social situation and the future as it stands seems to look a little bit blurry.

In response to the claims that Morocco is on the verge to join the “Arab Spring”, I would strongly disagree due to a variety of reasons.

Morocco avoided much of the Arab Spring violence because the Islamist Justice and Development Party (PJD) had been a recognized opposition party in the years before its rise to power in the November 2011 elections. This is in stark contrast to the Islamist parties that came to power during the Arab Spring protests in Egypt, Tunisia and Libya. In Hosni Mubarak’s Egypt, the Muslim Brotherhood was a banned organization. In Zine El-Abidine Ben Ali’s Tunisia, the “Ennahda” movement was proscribed and its leaders driven into exile. In Muammar Qadhafi’s Libya, the Muslim Brotherhood fared no better.

The PJD in Morocco, while always recognized as an opposition party, did not play a role in previous Moroccan governments, which may be why it was so successful in elections. Voters did not view the party as “corrupt” or as “collaborators.” Another factor that may have played to the advantage of the PJD relates to the way it responded to protestors’ demands in 2011. The PJD pursued a measured approach with how it pushed the king for reforms; it did not cause instability or invite a harsh response from the palace.

In Tunisia and Egypt, in contrast, protestors demanded a total regime change. In Libya, the demands were the same, and eventually the protests evolved into a full-fledged war. Yet in Morocco, the PJD showed a willingness to meet the king half-way by accepting his concessions despite some protestors’ demands for total regime change.

It is not clear how much power the king was initially willing to concede, but the king and his advisers may have realized that their reforms had to be deep if they wanted to avoid what happened in neighboring Egypt and Tunisia, where both regimes were completely toppled.

In addition to having a moderate Islamist party in the officially recognized opposition, the king’s other advantage was that the country’s more extreme Islamist group—the banned Justice and Charity movement—refused to use violence against the regime despite its strict position on the “illegality” of the monarch as the “leader of the faithful,” as well as its opposition to the monarchy as a system of government. The movement engaged in demonstrations as part of the 20th February youth movement, but refused to adopt violence—contrary to what occurred in Tunisia and Egypt, and later Libya.

Another crucial factor that will always keep Morocco safe from the “Arab Spring’ is the strong bond between the throne and Moroccans. It has always been for over a millennium that Moroccans, and no matter how far they will go with their disapproval with the palace, t have never demanded the fall of the king. The latter has always been considered the protector of unity of the country. Even in difficult times, Moroccan kings have always fought alongside their people against domestic and foreign enemies.

This custom does not seem to fade with time, and Moroccans have shown enough maturity in their demands for reforms. Indeed they went to the streets to exercise their constitutional right of demonstrating, but they did so with a highly appreciated and civilized manner, which left the whole world in disbelief. What distinguished Morocco from the rest of the Arab world is the strong relationship between the King and the people.

For some, the Galvan case is a pretext, an open window allowing Morocco to dump the overflow of discontent and indignation. Whether this case and its consequences will drag the country into uncertainty or not, the answer is no. If anything, this case will open more positive windows for constitutional reforms, a demand long sought by Moroccans, and Morocco will always remain the envy of the rest of the Arab world for that matter.