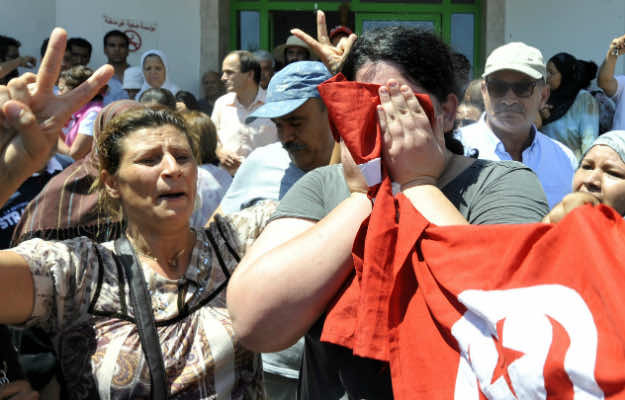 The country is in the grip of a political crisis sparked by the murder of an opposition politician last month, the second such killing this year.

Ennahda chief Rached Ghannouchi was due to meet Houcine Abassi, chief of the powerful UGTT unions organisation on Monday to discuss the crisis, although the time and location of the meeting have been kept secret so far.

Critics of the government are calling for demonstrations on Tuesday night to defend women’s rights followed by a march outside parliament, where the opposition has held nightly demonstrations since the July 25 assassination of opposition MP Mohamed Brahmi.

Tuesday is the 57th anniversary of the Personal Status Code that was adopted on August 13, 1956, giving Tunisian women unequalled rights in the Arab world at the time.

Opponents of the ruling Ennahda party — including political parties and the powerful UGTT labour union — believe these rights are now under threat from Islamists in the country.

“This will be a historic demonstration given the difficult circumstances the country is going through: political killings, terrorism and attempts to roll back women’s rights,” she told a news conference.

Amel Radhouani, from the Femmes Libres (Free Women) group said the march would send a clear message to the Islamists in power.

“This will not be a celebration but a march against terrorism, and Ennahda’s attempts to take back women’s gains. There is a political will in this goal,” Radhouani said.

According to opposition groups, Ennahda has been too passive in dealing with radical imams who have called for the return of polygamy and marriages involving minor girls — traditions banned in Tunisia under the 1956 law.

Meanwhile, political parties have failed to reach a consensus on a proposed constitution, which makes no clear guarantee of the equality of the sexes.

Ennahda came in for heavy criticism last year when it tried to press through the idea of gender “complementarity”.

But the party has denied the allegations, and on Monday Ennahda urged its supporters to gather from 1500 GMT on Tunis’ Habib Bourguiba avenue, epicentre of the 2011 uprising that toppled the regime of veteran president Zine El Abidine Ben Ali.

It said the rally would be held under the slogan: “Tunisia’s women, pillars of the democratic transition and national unity”.

The slogan reflects the position of the Islamists who insist that “transitional institutions” be kept in place in the absence of a consensus on the country’s new constitution.

Both sides hope to repeat the success they had early in August in bringing tens of thousands of their supporters to the streets, before four days of calm as people marked the end of the Muslim fasting month of Ramadan.

But there seems to be no sign of a political breakthrough as the country’s crisis deepens.

Although the National Constituent Assembly suspended work drawing up a new constitution last week to give Ennahda and the opposition time to resolve their differences, a timetable for talks has yet to be set.

The opposition coalition, made up of parties from across the political spectrum, has pressed its calls for the resignation of the government and the dissolution of the assembly.

The UGTT, which has some 500,000 members and can paralyse the country with strike action, has also called for the resignation of the government and its replacement by a cabinet of technocrats.

Islamists have rejected their demands, and proposed a government including representatives of all political parties, and called for elections in December.