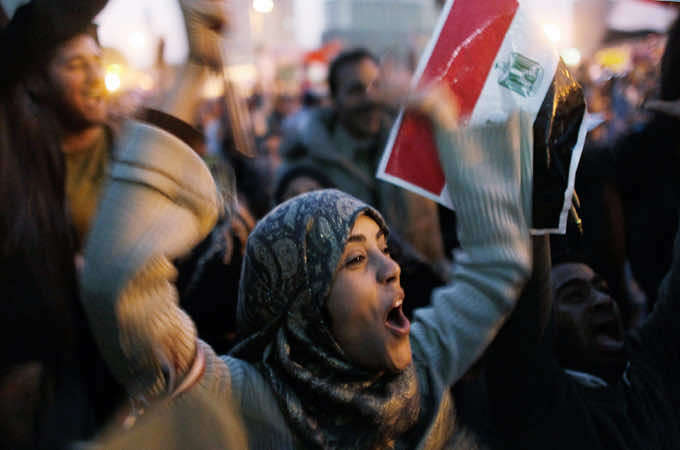 Egypt’s army-installed interim government is divided over whether to use force to disperse the protest camps of loyalists of ousted president Mohamed Morsi, delaying its response, analysts say.

For weeks, the government has threatened Morsi’s supporters with imminent action to clear their camps in Cairo’s Rabaa al-Adawiya and Nahda squares, which have paralysed parts of the capital and have stalled transition plans.

Despite several false alarms, action by the security forces has so far failed to materialise and separate statements from the army, the cabinet and the presidency suggest the interim government is not speaking with one voice, analysts say.

“Within the government, there are two contradictory directions,” said Rabab al-Mahdi, professor of political science at the American University of Cairo.

One camp represented by the interior ministry and the military wants to go in and disperse the protesters, she said.

“The other camp, represented by Vice President Mohamed ElBaradei and Deputy Prime Minister Ziad Bahaa Eldin speak to a different constituency and have a more democratic approach,” Mahdi told AFP.

Morsi’s turbulent single year in power polarised Egyptians and his ouster by the military on July 3 only deepened divisions.

His supporters have vowed to keep fighting for the Islamist leader’s reinstatement at any cost, agitating a large part of the public.

The government’s cautious approach in dealing with the pro-Morsi protesters is unusual in a country where for decades authorities have used a heavy hand in dealing with dissent, and points to the seriousness of the crisis.

“The government is trying to take as many measures as possible to minimise trouble,” said H.A. Hellyer, a non-resident fellow at the Brookings Institute.

Human rights advocates said the interior ministry held an unprecedented meeting with non-governmental organisations to discuss the implications of breaking up the sit-ins.

The ministry also said it would ask human rights groups and the media to attend the dismantling of the camps.

“If it was just up to them, the interior ministry would go in and dismantle the protests, but there are some within the cabinet and even within the military who are more torn about the issue,” Hellyer said.

ElBaradei has been an advocate of a negotiated solution with Morsi’s Muslim Brotherhood.

Other factors are forcing authorities to exercise restraint.

“The police are not facing just any kind of sit-in. They are dealing with the most organised political force in the country. They know that the cost will be higher than the dispersal of past protests,” Mahdi said.

That, together with the government’s internal divisions and international pressure to avoid a bloodbath “no longer gives the government a carte blanche to deal with the protesters,” she said.

Both the United States and the European Union sent envoys to Cairo — Deputy Secretary of State William Burns and Special Representative Bernadino Leon — to talk to the interim government and its Muslim Brotherhood opponents.

After their mediation efforts were rebuffed, they issued a strongly worded joint statement calling for a political solution.

But Mahdi believes that increases in attacks by militants at home or abroad could tip matters in favour of a resort to force.

“If the threat in the Sinai Peninsula continues to escalate, as well as what’s happening in other countries like Yemen or Pakistan, then (the government) can say what’s happening is proof that Islamists are turning to terror and this might ease some of the pressure,” she said.

Karim Ennarah, a researcher in criminal justice at the respected Egyptian Initiative for Personal Rights said the government faced a crippling dilemma.

“The interior ministry doesn’t know how to deal with protests without there being killing. Even if there is no intention to kill, it just takes one thing to trigger a very rapid escalation,” Ennarah said.

“The Egyptian police doesn’t have the training or the experience in dealing with such protests with proportionate force,” he said.

How the Muslim Brotherhood protesters will react is also a big unknown factor for the interim authorities.

Reports of weapons inside the pro-Morsi sit-ins and calls for investigation by Amnesty International of allegations of torture by Morsi supporters have piled more pressure on the government.

“If they continue with their marches, blocking roads and agitating people, it will allow the authorities to forego their reservations about dealing with the protesters,” Mahdi said.

“If, however, they take a more measured approach and combat the idea that they are using violence, it will make the decision more difficult for the authorities.”