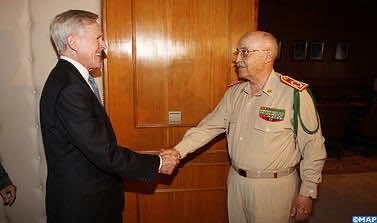 Morocco’s minister-delegate in charge of the national defense administration, Abdeltif Loudyi, examined here this Monday with US secretary of the navy, Ray Mabus, various aspects of cooperation in defense matters and prospects of developing it.

The meeting that took place upon instructions of King Mohammed VI, supreme chief and chief of staff of the FAR, the Moroccan minister-delegate and the US official, currently on a work visit to the Kingdom (Aug.11-13) expressed satisfaction at the sound, excellent and sustained bonds existing between Morocco and the US and the dynamism of bilateral cooperation, fruit of strategic partnership between the two countries.

They also voiced keenness to develop the longstanding ties by consolidating and diversifying technical cooperation to include aspects related to further promoting armies’ inter-operability and reinforcing their capacities to face potential threats.

The US secretary of the Navy praised political, economic and social reforms carried out by HM the King as well as the subsequent progress and stability prevailing in Morocco, considered as a strategic ally by Washington.

The US military official also reviewed on the same day with the General de Corps d’Armée, FAR general inspector and commander of the Southern zone, bilateral military cooperation that includes joint exercises, exchange of information visits and participation in training sessions.

They also looked into means to further develop bilateral cooperation, mainly between Morocco’s Royal navy and its US peer, in maritime spaces security, and the fight against illegal trafficking, in a bid to promote inter-operability between the two armies through the exchange of experience and expertise.