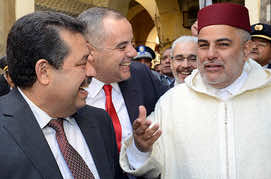 The crisis testing Morocco’s coalition government is stirring a national debate over the need to reform the electoral process and the way in which party alliances are created.

Under the current list-based, proportional representation system, the party that wins the most seats has to compromise with its rivals and form a coalition government.

But as political analyst Jamal Zahraoui argues, “Parties come together not on the basis of ideology or political convictions, but because of their own interests.”

“This is why problems keep on cropping up within alliances,” he says. “An example is the current crisis experienced by the coalition government, which arose because of the differences between the points of view of the allied parties.”

As a result, he adds, “the interests of the nation can end up being held hostage”.

“Since it was announced that the Istiqlal Party would withdraw from the government, the country has been in slow motion,” Zahraoui tells Magharebia.

Prime Minister Abdelilah Benkirane has stated several times that even though his Justice and Development Party (PJD) comfortably won the 2011 Morocco elections, it had to form an alliance with other parties to establish a majority, because the electoral system did not favour the emergence of a single party.

Reform of the electoral system is vital and should be treated as a top priority before the next election, otherwise the same political meltdown will happen again, political analyst Mjid Nouari maintains.

“Reform of the electoral laws will, of course, stir up a big controversy and tensions, because the small parties will feel threatened by the prospect of being squeezed out,” Nouari adds.

In the last legislative elections, which were held early, 31 of 35 parties participated. Yet only 18 were able to win seats in parliament, including five that only won one seat.

To limit the fragmentation of the political landscape, some political figures are calling for change.

Party of Progress and Socialism (PPS) official Mohamed Grine suggests that parties build their alliances before the elections.

These alliances must be formed, he argues, on the basis of manifestos and clear pledges to voters. This would solve the problem of fragmentation and the risk that coalitions could collapse, he tells Magharebia.

In Grine’s view, the ideal situation would be to have a modernist camp and a conservative camp competing against each other.

Meanwhile, Moroccans express hope that the political landscape will clear up before the next national ballot.

“Everything is mixed up,” student Brahim Cherrat says. “Alliances are not based on ideology. This is very bizarre and creates even more confusion in voters’ minds.”

“As a young person, I hope that things will change by the time of the next elections,” the student adds. “Electoral laws must be reformed and political involvement is needed.”