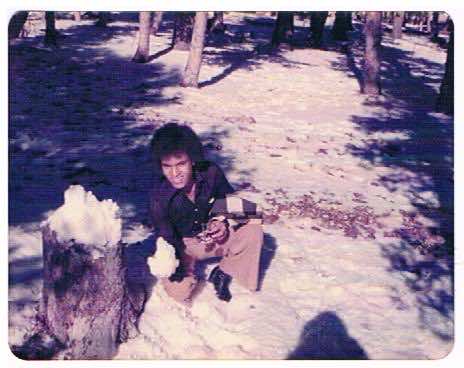 My host family went on a trip to Santa Fe, New Mexico for a business of their own and I had to stay at home in south-east Albuquerque. The place where I lived with my American host family was called Hermosa. The word is Spanish and simply means pretty or beautiful. The neighborhood was lovely, calm and beautiful. All houses were ground floor buildings with front and back yards. Before their departure for Santa Fe, my hosts told me they would stay overnight there, settle something they had to deal with then make it back home the following day.

When I woke up the next day, the ground, the roofs of houses and trees were heavily covered with snow. Local radio stations reported that a heavy blizzard had hit certain parts of New Mexico and that the highway to and from Santa Fe had been blocked with snow. Traffic was temporarily interrupted. I received a call from my American family saying that they would stay as long as their safety on the road could be compromised. I was not supposed to go to school for there was some sort of school break.

I stayed at home, read as much as I could, watched TV and at times when I got too much bored, practiced soccer by myself in the backyard despite the snow. The second day went by just as did the first. The third day could have been similar to the previous two days but late in the evening something strange happened. As I was a “night owl” and could not make it to bed early, I stayed in the living room and watched TV. I was a fan of Johnny Carson’s the “Tonight show” so there I was absorbed in watching the show. All of a sudden I had a strange feeling that someone was watching me from outside as the heavy curtains were not completely drawn over the glass “façade” of the living room and the adjacent windows.

The family’s pet, a schnauzer dog was there on the sofa but she seemed not to have taken notice of anything odd. I questioned myself as dogs would not fail to acknowledge any strange intrusion. As I sat for a few more seconds, I told myself I had better do certain things anyway in case an emergency would occur. I quickly got up, went to the front door and locked it (It was not common at the time for most Americans to lock their houses or cars’ doors). I also locked the kitchen outer door. After that, I went to the den and locked its sliding door.

The next step was for me to get to my room and get barricaded there along with a telephone. Unfortunately the kitchen telephone could not be moved so I decided to take an alternative measure. I took a kitchen knife in case I had to defend myself, went to my room and locked it from within. As the old Romans used geese, I decided to use the dog as a first “alarm system”. My heart was throbbing as I was getting psyched for any unpleasant scenario to take shape. Time was very slow to get by and I got too exhausted to keep guard all night long so there I fell fast asleep.

When it was morning, I thought what I had experienced was merely another nightmare. I went to inspect the different parts of the house. Everything was in place. The dog was wagging her tail, apparently very pleased to say “Hi”. We went out into the yard and there I discovered that the strange feeling I had the night before was right. There were heavy boots prints on the snow. They progressed anti clockwise round the house. Who that might be, I could never tell. What I have retained however from the experience is… Trust your gut feeling when it is urging you to swiftly take action.