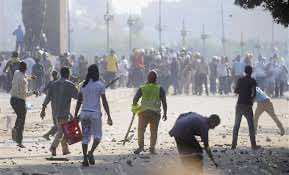 At least 163 people were killed and over 7,000 injured when Egyptian police moved in to forcibly disperse two sit-ins staged by supporters of ousted President Mohamed Morsi in Cairo and Giza, medics and eyewitnesses said Wednesday.

The field hospital in Rabaa al-Aawiya Square, the site of the larger of the two sit-ins, said that at least 150 Morsi supporters had been killed and over 7,000 wounded in the police assault.

In the smaller sit-in camp in Giza’s Nahda Square, a doctor at the field hospital said at least four people had been killed.

Eyewitnesses said that three charred bodies had been found in the nearby Urman Park, which caught fire during the sit-in dispersal.

A female protester said that security forces were besieging hundreds of protesters at Cairo University’s Engineering Faculty overlooking the square, saying that at least six had been killed and dozens injured.

Egypt’s ambulance service said it had registered five deaths in the two squares, according to state-run television.

The Egyptian Interior Ministry said three police officers had been killed and nine wounded during the dispersal of the sit-ins.

In a statement, the ministry said that police had come under fire while using teargas to disperse protesters.

A tense calm prevailed in Nahda Square, as protesters were forced into adjacent streets as police moved in to dismantle protesters’ tents in the square.

A number of protesters are currently trying to assemble outside the nearby Al-Isteqama Mosque in hopes of making their way back to the square.