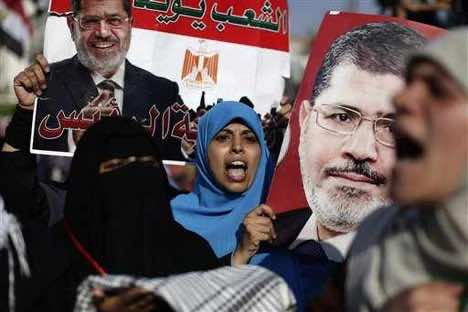 “Today you face a conspiracy by Egypt’s former regime. Blood of the innocent that the interior ministry and security services shed today in Cairo appeals to you to fill the streets and thwart the conspiracy,” the Islamic Action Front (IAF), the political arm of Jordan’s Muslim Brotherhood, addressed Egyptians in a statement.

“The fate of Egypt and all Arabs and Muslims will be determined in line with your action. Do not let the coupists, the Zionists and US adminstration win,” the IAF, the country’s main political party, added on its website.

In a separate statement, Jordan’s Muslim Brotherhood also called for rallies outside Egypt’s embassy in Amman to protest against the bloodshed.

“We call on the Jordanian people to demonstrate Wednesday evening outside the Egyptian embassy to condemn the massacre against the Egyptian protesters,” it said.

Amid chaotic conditions at the Cairo protest camps, an AFP correspondent counted at least 124 bodies in a makeshift morgue set up by medics manning a field hospital and treating scores of wounded.

Egypt’s Muslim Brotherhood said at least 2,200 people were killed and more than 10,000 injured in the crackdown. The government said 56 people have died.