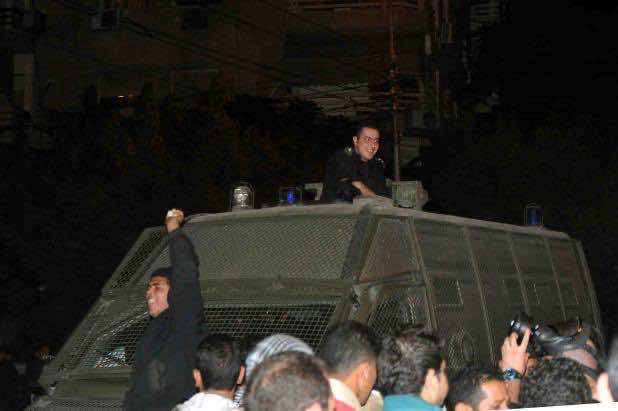 As clashes raged in the capital, three churches were attacked in central Egypt, with Christian activists accusing Morsi loyalists of waging “a war of retaliation against Copts in Egypt”.

Hours after the first tear gas canisters rained down on tents of protesters in the sprawling Rabaa al-Adawiya camp in east Cairo, an AFP correspondent counted at least 124 bodies in makeshift morgues.

The Muslim Brotherhood, from which Morsi emerged, said that 2,200 people had been killed and over 10,000 injured as authorities confirmed 56 deaths in Wednesday’s violence.

Security officials had spoken of a gradual dispersal of the sit-ins over several days but the dramatic descent on the squares shortly after dawn came as a surprise to many.

Al-Azhar, Sunni Islam’s main seat of learning, which sided with the military in its overthrow of Morsi on July 3, distanced itself from the crackdown.

“Al-Azhar stresses to all Egyptians that it did not know about the methods used for the dispersal of the protests except through media channels,” Grand Imam Ahmed al-Tayyeb said in a televised statement.

Witnesses and an AFP correspondent said after firing tear gas security forces surged into Rabaa al-Adawiya, sparking pandemonium among the thousands of protesters who had set up the camp soon after Morsi was ousted.

Clashes quickly erupted between protesters and security forces on the outskirts of the camp, with automatic fire reverberating across the square.

In the smaller of the protest camps at Al-Nahda square in central Cairo, police said they took control of the square after two hours.

The violence came amid international appeals for calm.  Berlin called on all sides to renounce violence and return to negotiations and Britain, Iran and Qatar condemned the use of force by Egyptian police.

It was a dramatic turn of events for the Muslim Brotherhood, who just over a year ago celebrated Morsi’s win as Egypt’s first elected president.

But his turbulent year in power, marred by political turmoil, deadly clashes and a crippling economic crisis, turned many against the Islamist movement.

The Rabaa al-Adawiya protest camp, where several Brotherhood leaders had been staying, “is calling on Egyptians to take to the streets to stop the massacre,” Haddad said.

But the anger against the Islamist movement was evident Wednesday as residents of several neighbourhoods clashed with Morsi loyalists.

In Cairo, supporters of the deposed president blocked several roads in the central Mohandesseen neighbourhood, and were working to set up a new protest camp there, witnesses said.

Police were deployed in the area where tear gas was fired and gunshots heard.

In Menya, witnesses said the Saint Ibram and Virgin Mary church and the Saint Mina church were torched.

Assailants also threw firebombs at Mar Gergiss church in Sohag, a city with a large community of Coptic Christians who comprise up to 10 percent of Egypt’s 84 million people, causing it to burn down, the agency said.

Coptic Pope Tawadros II, together with Al-Azhar’s Tayyeb, had supported the military and sat by army chief Abdel Fattah al-Sisi when he announced that Morsi had been deposed and laid out a new political roadmap for the country.

As authorities struggled to contain the unrest in the country, Egypt’s railway authorities announced that all trains had been grounded to prevent protesters from moving outside of Cairo and reassembling.

The United States, which provides $1.5 billion in mostly military aid to Egypt every year, maintains close ties to the Egyptian military but says it favours a rapid return to elected civilian rule.