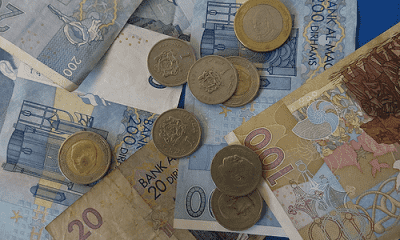 Princeton, NJ – There are two currency systems used in Morocco. One is that of the Moroccan dirham, the official Moroccan currency that is printed on bills and coins. The other currency is the riyal, an old Moroccan currency which is no longer exists, but is still used by Moroccans to value purchases both small and large. 1 dirham is equal to 20 riyals.

In other words, the riyal is to the Moroccan dirham, as the nickel is to the dollar. Only, imagine that nickels no longer existed in reality, but stayed in our minds as a way to describe the prices of things. So, the money in your pocket would be dollars, and you would use dollars to buy everything, but you think of prices in nickels.

Understanding the relationship between the Moroccan dirham and riyals is key to making sense of Morocco’s marketplaces. Knowing that sometimes the prices you hear are riyals and not dirham can save you both money and frustration.

If the riyal were American…

Let’s explore the alternate reality described above a little further.

Imagine that when you go to the store, the prices are listed in dollars but in your head you value everything in nickel. When you see the label on a $3.50 gallon of milk you think, “That’s worth 70 nickels”. In your mind, a $4.00 loaf of bread is 80 nickels.

This is exactly how the riyal exists alongside the dirham in Morocco, and they are used in such a way in some of the same situations described above.

When riyals are used instead of dirhams:

When riyals are not used:

How to convert riyals to dirhams and vice versa

To go from dirhams to riyals multiply by 20, and to go from riyals to dirhams divide by 20.

This video features Moroccans describing the prices of various goods in riyals. Watching this video will help you to familiarize yourself with the riyal and will give you an opportunity to practice convert between riyals and dirhams in your head.

First published at: the armchair arabist