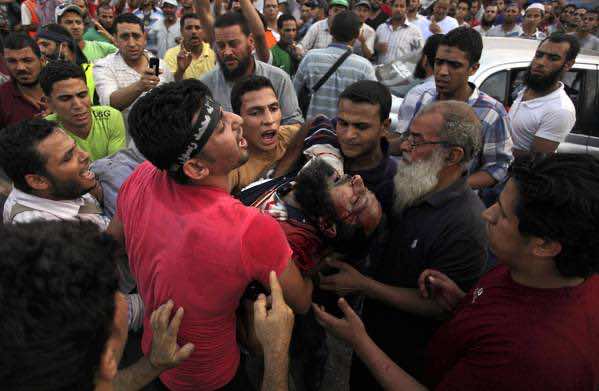 Egypt’s latest bloodshed has underlined what experts say is the weakened influence of the United States, which turned a blind eye to a coup while advocating a return to democracy.

The United States has struggled to develop a coherent approach to Egypt since veteran strongman Hosni Mubarak, a close ally, was deposed in 2011.

Washington placed little faith in his elected successor Mohamed Morsi, an Islamist, and was careful not to criticize the military when it overthrew him.

Nevertheless, on Wednesday the United States “strongly” condemned the military’s crackdown on supporters of the ousted Morsi and urged the military to show restraint.

“Violence will only make it more difficult to move Egypt forward on a path to lasting stability and democracy and runs directly counter to the pledges by the interim government to pursue reconciliation,” White House spokesman Josh Earnest said.

Earnest said that the United States also “strongly opposes” the army-installed authorities’ imposition of a one-month state of emergency.

More than 120 people were killed, according to an AFP correspondent who visited makeshift morgues, as the army and police cleared out two gatherings of pro-Morsi protesters.

But the United States has refused to describe the army’s July 3 ouster of Morsi, an Islamist who was Egypt’s first democratically elected president, as a coup.

The designation would oblige the United States to cut off some $1.3 billion in annual military aid to Egypt.

While the United States officially did not support the coup, Secretary of State John Kerry earlier this month said the army was trying to “restore democracy” in ousting the Muslim Brotherhood president.

Kerry later backtracked, saying that he supported dialogue among all sides in Egypt and a democratic transition.

But Kerry had also praised the military in the run-up to the coup, telling a Senate hearing in April that the army has been “incredibly responsible” and helped prevent a civil war in 2011.

“I think the military has been the best investment that America has made in years in that region,” Kerry said.

John McCain and Lindsey Graham, senators from the rival Republican Party who recently visited Cairo, were strongly critical of Morsi but said it was impossible not to describe his ouster as a coup.

“The United States finds itself in a very awkward situation with regard to the development in Egypt because of course the United States has very low influence over what happens in that country,” said Hussein Ibish, senior fellow at the American Task Force on Palestine.

Ibish said that the aid was effectively a subsidy to US defense contractors and also guaranteed that Egypt remained one of two Arab countries to maintain a peace treaty with US ally Israel.

“So if the US cut that aid off, the Egyptians could say… ‘We feel free to re-evaluate our relationship with that agreement because the broker has just broken their words,'” he said.

Ibish said that many US policymakers had presumed that Egypt, as a majority Muslim nation, would naturally support Morsi’s Muslim Brotherhood.

“Then they discovered that there is far more opposition to the Muslim Brotherhood than they had expected,” Ibish said.

“So they have been trying to kind of figure out how to promote democracy when there are two sides in Egypt that see democracy in completely different ways and differently than the United States,” he said.