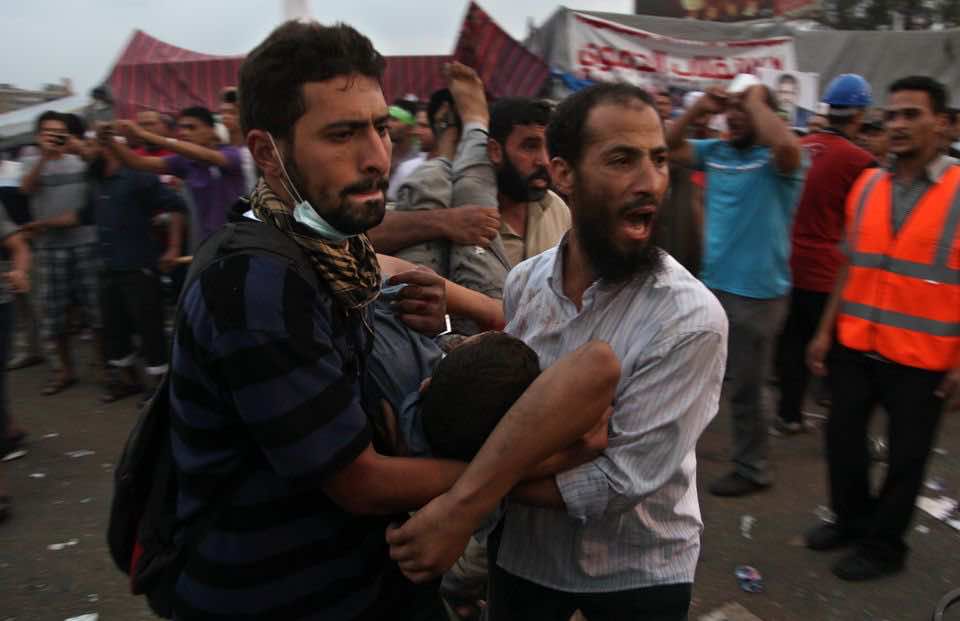 With clashes breaking out across the country and rioting erupting in Egypt’s second city Alexandria, Egypt’s army-installed authorities declared a month-long state of emergency effective from 4:00 pm (1400 GMT) Wednesday.

They also slapped Cairo and other provinces with curfews between 7:00 pm and 6:00 am.

Gory photographs and video images of the Cairo bloodbath dominated social media networks as world powers called for restraint and condemned the show of force by Egypt’s security forces.

Four churches were attacked in Egypt, with Christian activists accusing Morsi loyalists of waging “a war of retaliation against Copts in Egypt”.

Hours after the first tear gas canisters rained down on tents of protesters in Rabaa al-Adawiya, an AFP correspondent counted at least 124 bodies in makeshift morgues in the sprawling east Cairo camp.

The health ministry said at least 149 people were killed and another 1,403 people injured in the Cairo crackdown and in clashes across Egypt.

Among those who died in the clashes was 17-year-old Asmaa al-Beltagui, daughter of wanted Muslim Brotherhood leader Mohammed al-Beltagui, a spokesman for the movement said.

Security officials had spoken of a gradual dispersal of the sit-ins over several days but the dramatic descent on the squares shortly after dawn came as a surprise to many.

ElBaradei, in his letter of resignation to the interim president seen by AFP, said his conscience was troubled over the loss of life “particularly as I believe it could have been avoided”.

“It has become too difficult to continue bearing responsibility for decisions I do not agree with and whose consequences I fear,” ElBaradei said.

By Wednesday evening, hundreds of Morsi supporters were given safe passage out of Rabaa al-Adawiya, some flashing victory signs as they left through a security corridor.

A security official confirmed to AFP that hundreds of people were taking advantage of the safe passage offer but said some diehards stayed behind amid ongoing clashes with security forces.

Shortly after dawn, witnesses and an AFP correspondent said security forces fired tear gas before surging into Rabaa al-Adawiya, sparking pandemonium among the thousands of protesters who had set up the camp soon after Morsi was ousted.

In the smaller of the protest camps at Al-Nahda square in central Cairo, police said they took control of the square after two hours.

The violence came amid international appeals for calm.

Europe’s leading powers along with Iran, Qatar and Turkey strongly denounced the use of force by the military-backed interim government.

The White House said Washington “strongly condemns” the violence against the protesters in Egypt and opposes the imposition of a state of emergency.

But the anger against the Islamist movement was evident Wednesday as residents of several neighbourhoods clashed with Morsi loyalists.

In Alexandria, hundreds of angry Morsi supporters marched through the streets armed with wooden clubs chanting “Morsi is my president”.

An AFP reporter said the protesters set fire to car tyres and tore down pictures of army chief Abdel Fattah al-Sisi, who was behind the Islamist leader’s July 3 overthrow.

At one cafe where Sisi’s picture was hanging, they smashed the doors and beat up the patrons as they shouted “Sisi is a killer”.

But his turbulent year in power, marred by political turmoil, deadly clashes and a crippling economic crisis, turned many against the Islamist movement.