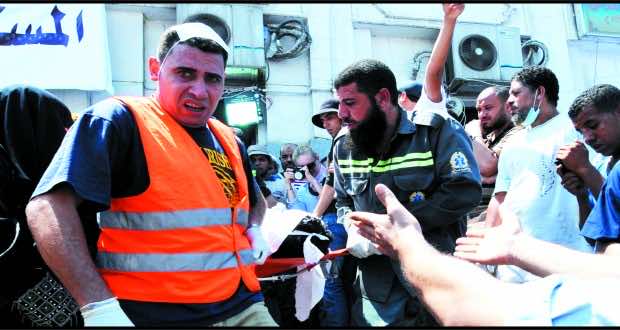 A snapshot follows of Wednesday’s developments in Egypt where a security crackdown on ousted president Mohamed Morsi’s supporters turned into a bloodbath which the authorities said cost almost 150 lives.

– Early in the morning, security forces backed by bulldozers move in on the two huge camps — Rabaa al-Adawiya and Al-Nahda Square in Cairo — where for more than a month thousands of Morsi supporters have been calling for his reinstatement, following his July 3 ouster by the army.

– Two hours after the start of the operation, the interior ministry says security forces have “total control” over the smaller of the two protest camps, Al-Nahda Square.

At Rabaa al-Adawiya, where access is denied to journalists who are not already in place, automatic gunfire and tear gas rain on the tent village.

– In the afternoon, an AFP journalist counts 124 bodies in three morgues at Rabaa al-Adawiya mosque and says many appear to have died from gunshot wounds.

Morsi’s Muslim Brotherhood movement says 2,200 people were killed and more than 10,000 injured, while the health ministry says 149 died across the country, including at least seven members of the security forces in Cairo where they say demonstrators opened fire on the police.

Among those killed is a veteran TV cameraman for Britain’s Sky News.

– The violence in Cairo sparks deadly clashes across the country, with the Brotherhood urging Egyptians to take to the streets to “stop a massacre”  The authorities stop all train services in and out of Cairo to prevent supporters of the Islamist ousted toppled president from reassembling.

Clashes take place in different areas of Cairo and in other towns. In the second city of Alexandria tear gas canisters rain down on a pro-Morsi march in the Sharq neighbourhood, amid repeated bursts of automatic gunfire.

– The authorities declare a month-long state of emergency and a night-time curfew in Cairo and 13 other provinces.

– Egyptian vice president and Nobel laureate Mohamed ElBaradei announces his resignation. The imam of Al-Azhar, Sunni Islam’s main seat of learning, distances himself from the crackdown.

– In early evening, hundreds of supporters of Morsi are given safe passage out of the Rabaa al-Adawiya encampment through a security corridor. A security official says government forces are in “total control” of the camp and that clashes have ended.