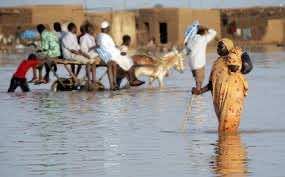 Egyptian military planes landed in Khartoum on Wednesday as part of a regional aid effort for victims of flooding in Sudan this month that claimed dozens of lives.

About 30 people have been killed and more than 84,000 affected by the worst floods in years to hit the Khartoum state region, according to figures cited by the United Nations.

Heavy rains that began on August 1 also affected tens of thousands of people in several other states, but Khartoum was the hardest-hit, the UN said.

A total of 40,000 families, or about 200,000 people, have been affected, he said, quoted by the Sudanese Media Centre, which is close to the security apparatus, without giving a separate breakdown for the capital region.

Egypt was the latest regional nation to send relief this week.

It said an Ethiopian cargo plane arrived on Tuesday with more than 70 tonnes of aid.

Separately, at a ceremony on Monday, Japan handed over more than$160,000 (120,300 euros) worth of tents, water purifiers and other emergency relief, Tokyo’s embassy said.

The US embassy said it was providing $50,000 in additional aid to support the Red Cross and Red Crescent.

The UN’s World Health Organisation, meanwhile, said the “flood and its consequences are anticipated to worsen.”

House flies and mosquitoes have been seen in “high density” over the past two weeks in Khartoum, Red Sea and North Darfur states, it warned, adding that almost 31,000 latrines had been destroyed by the floods.