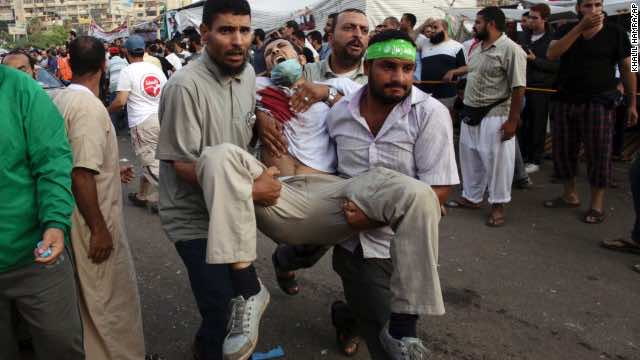 – Clashes between Morsi opponents and security forces, and between supporters and opponents of the ousted leader.

– Morsi is detained along with his guards at the defence ministry.  – Arrest warrants issued for 300 officials of Morsi’s Muslim Brotherhood.

July 8
– Fifty-seven Morsi loyalists killed and 480 wounded in violence outside the Republican Guard headquarters in Cairo.

The Brotherhood says soldiers and police “massacred” its supporters.

– Mansour sets out a charter for a political transition and vows fresh elections by early 2014. The Brotherhood rejects the decree.

– An interim government that includes no Islamist parties is sworn in.

– A court orders Morsi’s detention for questioning over suspected ties with Palestinian Islamist militant group Hamas in prison breaks and attacks on police.

– Morsi supporters and backers of the military stage huge rival rallies across Egypt.

July 27
– Eighty-one civilians and a police officer killed during clashes in Cairo, at a demonstration in support of Morsi.

August 7
– The army says it has killed “60 terrorists” in the Sinai, where Islamist militants have stepped up attacks since Morsi’s ouster. Security forces report losses of around 30 men in their own ranks. Interim government threatens a crackdown after having shown restraint during the Muslim holy month of Ramadan.

August 14
– Security forces move in on the two huge protest camps, Rabaa al-Adawiya and Al-Nahda Square in Cairo, where thousands of Islamist supporters of Morsi have been demonstrating for his reinstatement. Health ministry says 149 are killed as the demonstrators are dispersed and in violence which spreads across the country.

– The authorities declare a month-long state of emergency and a curfew in several provinces, notably Cairo and Alexandria.

– Beblawi praises police for their “self-restraint” and says the country remains committed to an army-drafted roadmap which calls for elections in 2014.

Already before Wednesday’s assault, more than 250 people, mainly supporters of Morsi, had been killed since late June in clashes with security forces and backers of the interim authorities.