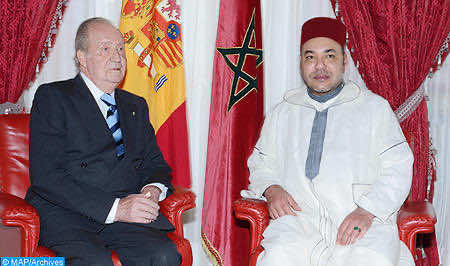 King Mohammed VI held, on Wednesday, a phone conversation with King Juan Carlos I of Spain.

During this phone conversation, the sovereign expressed to the Spanish king his heartfelt thanks and Morocco’s gratitude for the support of the Spanish government to stop the fire the broke out recently in a forest in the Agadir region.

The King gave his orders to the interior minister to be at the scene of the fire and see to it that all necessary measures are taken to preserve properties and people.

The interior ministers of both countries are continuously coordinating actions conducted to contain this forest fire. Bilateral cooperation is taking place in an exemplary manner. Spain has already assisted Morocco in similar circumstances and Morocco has also mobilized its means to back the neighboring country during such natural disasters.

Hundreds of forest hectares were destroyed by this forest fire which broke out on Saturday in the Mesguina and Admin forests in the Amskroud commune, 50 km east of Agadir.