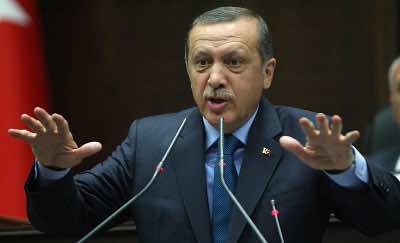 “The Security Council of the United Nations should convene quickly to discuss the situation in Egypt,” Erdogan told reporters in Ankara.

“This is a very serious massacre… against the Egyptian people who were only protesting peacefully,” he added, criticising “the silence” of the global community in the face of the bloodshed.

Egypt’s day of violence on Wednesday, triggered when security forces moved in to break up pro-Morsi protest camps, was the worst since the 2011 uprising that ousted president Hosni Mubarak.

At least 300 civilians across the country died in the unrest, health ministry official Khaled al-Khatib told AFP on Thursday. The interior ministry said 43 policemen had also been killed.

Erdogan, who heads Turkey’s ruling Islamic-rooted Justice and Development Party (AKP), has from the start condemned “the coup” by the military that led to Morsi’s removal from power in early June following mass street demonstrations.

Erdogan was a strong supporter of Morsi and his Muslim Brotherhood movement.

“Those who simply look on as a spectator to this coup, not denouncing it and not even having the dignity to qualify it as such, are responsible for the deaths of the children” in Egypt, he added.