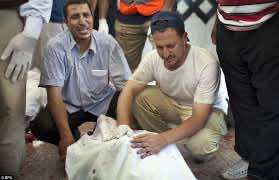 At least 370 people were killed in nationwide violence sparked by a crackdown on the protest camps of supporters of ousted Islamist president Mohamed Morsi, the health ministry said Thursday.

He said 113 people had been killed in the main Rabaa al-Adawiya camp which pro-Morsi protesters had occupied for weeks.

At the smaller of the two encampments in Nahda square, 21 people were killed and 193 died in the rest of the country, he said.

The interior ministry said 43 policemen had also been killed.