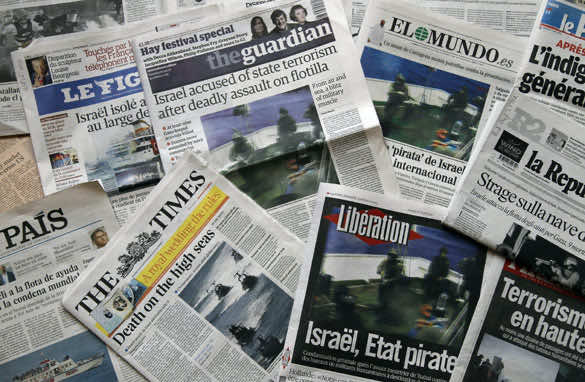 European and US newspapers on Thursday condemned the crackdown on supporters of ousted Islamist president Mohamed Morsi in Egypt, and urged Washington to act to push both sides towards reconciliation.

The Times in London described Wednesday’s assault in Cairo, which left more than 300 dead, as a “massacre” and warned the legitimacy of Egypt’s interim regime “hangs by a thread”.

“This was a massacre. The (Muslim) Brotherhood has not been blameless in the period of simmering anarchy since its removal from power, but yesterday’s operation was out of all proportion to any provocation,” the newspaper said in an editorial.

“It will almost certainly prove self-defeating.”

It urged Washington to act, suggesting it delay the shipment of F16 fighters and withhold extra funds promised last year for civilian uses, saying that “quiet acquiescence will be interpreted across the Muslim world as tacit support”.

The New York Times went further, calling on President Barack Obama to suspend the $1.3 billion in annual US aid to the Egyptian military, saying the latest bloodbath in Cairo risked sparking civil war.

“Egypt’s ruling generals have demonstrated beyond any lingering doubt that they have no aptitude for, and apparently little interest in, guiding their country back to democracy,” the paper said in an editorial.

“It is past time for Mr. Obama to start correcting that imbalance. Suspending assistance to Egypt’s anti-democratic military would be a good place to start.”

Under an editorial entitled “Egypt’s democracy dies a violent death”, the Financial Times said it too had lost faith in the military-backed government’s willingness and ability to guide the country towards inclusive elections.

Washington should suspend its aid “until the violence is halted and all parties agree to talks. The release of Mr Morsi has to be on the table,” the FT said.

However, it also laid blame on the Muslim Brotherhood, who “have refused every offer of negotiation”, and urged Turkey and Qatar to step up efforts to pressure the movement into finding a political solution to the crisis.

In France, Le Monde said the crackdown and the imposition of a state of emergency was a “terrible step backwards”.

“It negates everything that has been achieved since the revolution in January 2011,” which had ousted longtime ruler Mubarak.

The Economist magazine added: “The scale of the unrest and the depth of the country’s wounds are a grim omen for the future.”