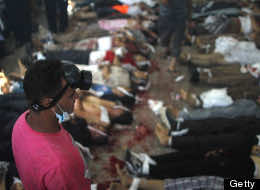 At least 525 people were killed in Egypt on Wednesday, including 202 protesters in a Cairo Islamist sit-in, a health ministry official told AFP.

The death toll included 43 policemen who died in violence across the country and 202 protesters killed in the Rabaa al-Adawiya protest camp, senior health ministry official Khaled al-Khatib said on Thursday.

“Eighty-seven also died in Giza and the rest elsewhere across the country,” Khatib said. Giza is the Cairo district where police broke up another Islamist sit-in on Wednesday.

The policemen died in clashes with the protesters in Cairo and in attacks on police stations across the country.