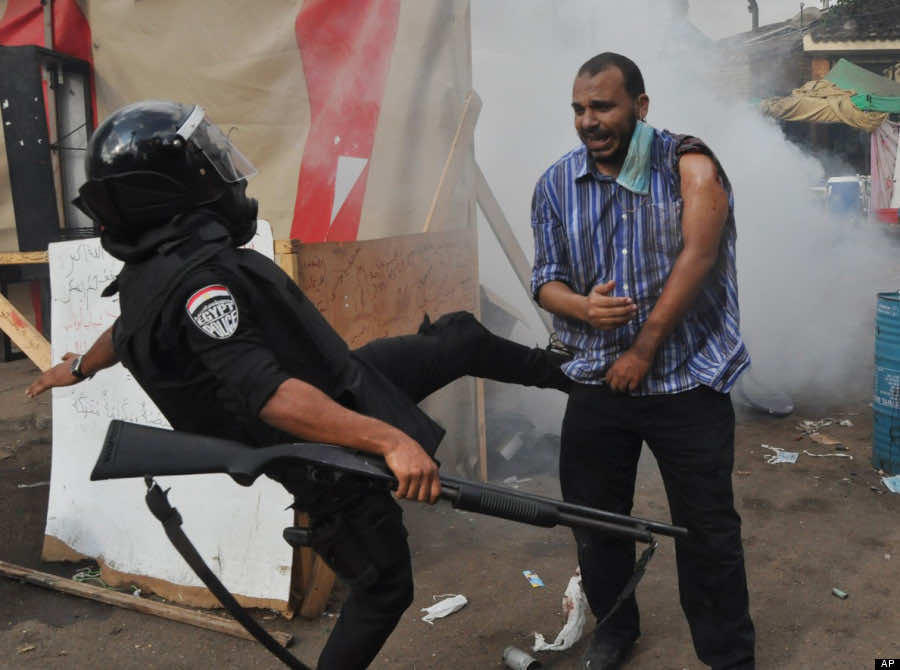 Islamists vowed to rally Thursday in support of deposed president Mohamed Morsi despite a violent crackdown that sparked Egypt’s worst day of violence for decades, with over 500 people killed.

As the death toll from the carnage soared, condemnation of Wednesday’s crackdown on two Muslim Brotherhood protest camps in Cairo poured in, with Britain, France and Germany summoning the country’s ambassadors to express concern.

The Brotherhood, the Islamist movement from which Morsi hails, said a march was planned from the Al-Iman mosque in the capital “to protest the death of their relatives”.

The call came after a tense night, following the army-backed interim government’s decision to impose a month-long, nationwide state of emergency and curfews in 14 provinces.

In Cairo, trucks cleared debris from the charred sites of the Rabaa al-Adawiya and Nahda square protest camps, occupied for weeks by Morsi loyalists, paralysing the area.

Posters of Morsi were strewn next to burnt tins of food, as light traffic returned to the streets.

The health ministry continued to update its toll, saying at least 525 people had been killed across the country on Wednesday, including 43 police.

Despite the violence, Egypt’s press trumpeted the end of the pro-Morsi demonstrations, which had occupied two Cairo squares since the military ousted the Islamist president on July 3.

“The nightmare of the Brotherhood is gone,” the daily Al-Akhbar’s front page headline read.

The newspapers carried photos of protesters brandishing weapons and throwing stones, but none from makeshift morgues where dead protesters were lined up in rooms slick with blood.

Residents of Rabaa al-Adawiya said the tension and paralysis caused by the protests had put lives on hold.

“We were hearing gunshots all day… (The dispersal) had to happen. People here were not living,” said Omar Hamdy, 23.

At least four churches were attacked as police broke up the protests, with Christian activists accusing Morsi loyalists of waging “a war of retaliation against Copts in Egypt”.

The day’s violence was Egypt’s worst in decades, exceeding even that seen during the 18-day uprising that ousted president Hosni Mubarak.

An AFP correspondent counted at least 124 bodies in makeshift morgues in the Rabaa al-Adawiya protest site and the Brotherhood spoke of 2,200 dead overall and more than 10,000 wounded.

“We will always be non-violent and peaceful. We remain strong, defiant and resolved,” he tweeted. “We will push forward until we bring down this military coup.”

Morsi loyalists have insisted their demonstrations are exclusively peaceful, but an AFP reporter saw several protesters carrying weapons at Rabaa on Wednesday.

The violence prompted vice president and Nobel laureate Mohamed ElBaradei to resign, saying he was troubled over the loss of life, “particularly as I believe it could have been avoided”.

The dramatic assault on the sit-ins began shortly after dawn on Wednesday, with security forces firing tear gas before storming the sites.

The operation surprised many, coming after officials described plans to gradually disperse the protests over several days in a bid to avoid violence.

Some Morsi supporters were eventually able to leave the Rabaa site through a safe passage, flashing victory signs as they left.

By evening, a security official said Rabaa al-Adawiya was “totally under control”.

In the smaller of the protest camps, at Al-Nahda square in central Cairo, police said they had control of the area after just two hours.

The White House said Washington, which provides Egypt with $1.3 billion in annual military aid, “strongly condemns” the violence against the protesters and opposed the imposition of a state of emergency.

But Egypt’s interim prime minister Hazem al-Beblawi praised the police for their “self-restraint” and said the government remained committed to an army-drafted roadmap calling for elections in 2014.

The violence was not confined to Cairo, with clashes between security forces and Morsi loyalists breaking out in the northern provinces of Alexandria and Beheira, the canal provinces of Suez and Ismailiya, and the central provinces of Assiut and Menya.

The violence was a dramatic turn of events for the Brotherhood, which just over a year ago celebrated Morsi’s victory as Egypt’s first elected president.

His single year in power, marred by political turmoil, deadly clashes and a crippling economic crisis, turned many against the Islamist movement, with millions taking to the streets on June 30 to call for his removal.