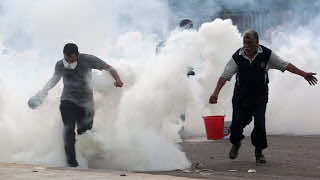 Egypt faces new polarisation and the potential for further violence after a crackdown on supporters of ousted president Mohamed Morsi turned into a bloodbath, analysts say.

More than 500 people were killed on Wednesday when security forces moved to disperse two Cairo protest camps of Morsi loyalists in a heavy-handed assault that drew international censure.

But domestically, the government’s actions were well-received by many, with the media saying police forces had rid Egypt of the “nightmare” of Morsi’s Muslim Brotherhood.

Analysts warned that popular support could lead to an even wider crackdown on Morsi loyalists, and expressed hope that politicians would instead reach out to moderate Islamists.

“The polarisation gets much, much worse” after the deaths, warned Michael Hanna, a senior fellow at The Century Foundation, a US think-tank.

“The fact that the military has gone this far in terms of a crackdown makes the possibility for any near-term compromise for the Morsi camp impossible, and that in turn makes more repression inevitable,” he said.

On Thursday, supporters of the ousted Islamist president launched new demonstrations, despite a warning from the interior ministry a day earlier against any additional protests.

“They will continue to demonstrate, hold strikes in different cities, maybe targeting different provinces,” predicted Nabil Abdel Fattah, an analyst with the Ahram Centre for Political and Strategic Studies.

Morsi’s supporters will try “to present the government as unable to control the country, and try to show the Muslim Brotherhood is the most powerful and popular group in Egypt, which is their belief,” he added.

The international backlash against the deaths has been fierce, with condemnation pouring in and several European countries summoning Egypt’s ambassadors over the violence.

The military-backed government lost a key figurehead with the resignation of liberal Nobel peace laureate Mohamed ElBaradei, who was serving as vice president before Wednesday’s crackdown.

But many jeered his resignation domestically, and the government and military can continue to count on popular support, analysts said.

“The real issue is how the Egyptian people perceive the Muslim Brotherhood,” added Hassan Nafaa, an Egyptian political analyst.

“At the moment the majority view them very negatively and consider them to blame for the situation we are in.”

Abdel Fattah said that sentiment would eventually lead to a shift in tactics by the Brotherhood.

“They will gradually come to see what the majority feels,” he said.

“There are moderates within the Muslim Brotherhood, and when Egypt returns to semi-stability, there will be discussions within the organisations about its mistakes.”

But others are less optimistic, with Nafaa saying he feared a witch-hunt against Morsi supporters.

“I am afraid that the government might now carry out a policy of revenge against the Muslim Brotherhood, which will close the door for political change, and of course that will mean bloodshed.”

Egypt’s government must “convince the Muslim Brotherhood moderates that they have a role to play in politics in the future,” he added.

“There was a political solution” to the anti-Morsi protests, he said.

He warned that Islamists affiliated with the Brotherhood, though not necessarily under their control, could now turn to serious violence.

He predicted increasing attacks in the Sinai peninsula, where militants have almost daily targeted police and military installations.

And he said sectarian attacks like a string of incidents in which churches were set alight on Wednesday were also likely to multiply.

“It doesn’t take too many leaps of the imagination to envision assassinations, hit-and-run attacks on police and even suicide bombings,” Hanna said.

“You put all that together and it would be hard to imagine a near-term return to normalcy.”