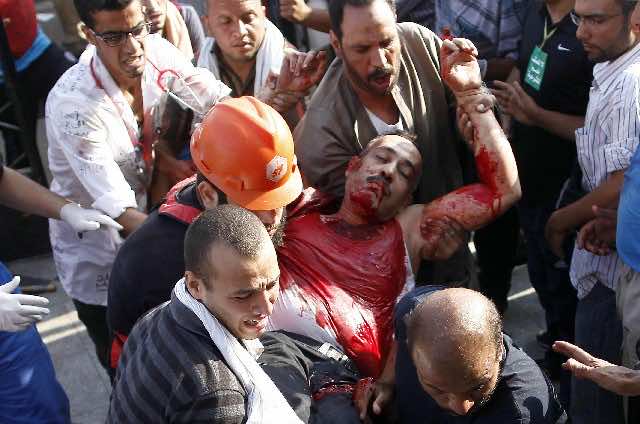 Developments in Egypt, where a security crackdown on ousted president Mohamed Morsi’s supporters on Wednesday turned into a bloodbath.

According to an updated toll at least 525 people were killed — 482 civilians and 43 police — and 3,500 injured. According to a senior health ministry official 202 protesters were killed in the Rabaa al-Adawiya protest camp alone.

The Muslim Brotherhood says 2,200 have been killed and more than 10,000 injured.

WEDNESDAY, AUGUST 14
– Early in the morning, security forces backed by bulldozers move in on the two huge camps — Rabaa al-Adawiya and Al-Nahda Square in Cairo — where for more than a month thousands of Morsi supporters have been calling for his reinstatement, following his July 3 ouster by the army.

– Two hours after the start of the operation, the interior ministry says security forces have “total control” over the smaller of the two protest camps, Al-Nahda Square.

– The violence in Cairo sparks deadly clashes across the country, with the Muslim Brotherhood, from which Morsi hails, urging Egyptians to take to the streets to “stop a massacre.”

In the second city of Alexandria tear gas canisters rain down on a pro-Morsi march, amid repeated bursts of automatic gunfire.

– The authorities declare a month-long state of emergency and a night-time curfew in Cairo and half of the provinces.

– In early evening, hundreds of supporters of Morsi are given safe passage out of the Rabaa al-Adawiya encampment through a security corridor. A security official says government forces are in “total control” of the camp and that clashes have ended.

THURSDAY, AUGUST 15
– The authorities close indefinitely the Rafah border crossing with the Gaza Strip, the only gateway into the Hamas-ruled Palestinian territory that bypasses Israel.

– Islamists vow to rally from the Al-Iman mosque in the capital “to protest the death of their relatives”.

– The interior ministry says it has instructed police to use live ammunition in dealing with attacks on government buildings and police forces.

– French President Francois Hollande summons Egypt’s ambassador to France and says that “everything must be done to avoid a civil war”.

UN rights chief Navi Pillay demands a wide-ranging probe into the crackdown.  US President Barack Obama says the United States has cancelled military exercises with Egypt and warns that Egypt had entered a “more dangerous path”.