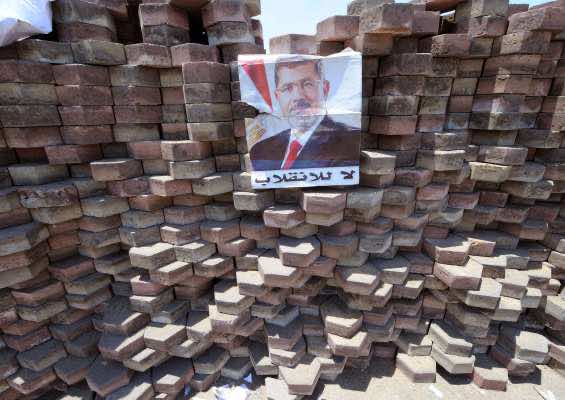 Umm Abdallah sat silently praying over the body of her husband, killed in a bloody police crackdown on supporters of ousted Islamist president Mohamed Morsi, before collapsing into broken sobs.

The corpse wrapped in a white shroud with his name “Mohsen Radi” handwritten in thick black marker lay on the ground of the makeshift morgue at the Iman mosque, a few kilometres from the Rabaa al-Adawiya protest site where over 200 people were killed.

His body lay squeezed between more than a dozen others, dark stains of blood had seeped through the white fabric of the shroud.

“My husband was 48 years old, he’s gone and I now have five children to look after,” said Umm Abdallah, crying under her full-face veil.

Stroking her shoulder, her daughter tried to offer words of comfort.

“We will not let his blood go in vain. We will continue doing what we are doing. If one of us dies, another is born in his place,” she said.

Koranic verses and prayers played from loudspeakers inside the mosque, as one man sprayed the bodies with disinfectant.

Another veiled woman waved sticks of incense over the bodies to alleviate the stench, as another man placed large cubes of ice on the corpses.

Said Khaled Abdel Nour, 32, points to one body. “This is my wife’s brother.

He died at the age of 22, trying to protect the bodies from being set alight by the security forces.”

“I am happy to sit here between these people, who will go straight to paradise. Their blood will be a curse on Sisi and his soldiers,” he said of army chief Abdel Fattah al-Sisi who orchestrated Morsi’s July 3 ouster.

Morsi supporters had been on the streets for over five weeks to protest the military’s ouster of Egypt’s first elected president.

Outside the mosque, dozens of relatives of the victims chanted “There is no god but God” as each body was brought out of the mosque in a wooden coffin, ready to be buried.

The police crackdown which began on Wednesday morning left behind it a trail of blood and destruction.

By Thursday afternoon, cleaners were working to remove the debris from the site of protest camp and army troops set-up checkpoints in the area.

Charred trees stood hauntingly over scraps of metal strewn between burnt shoes, tins of food and others items left behind after the clashes.

Four bulldozers worked to remove rubble, metres from the mosque, whose smouldering walls only two days earlier provided refuge to senior leaders of the Muslim Brotherhood, the movement from which Morsi emerged.

In the area, residents said the tensions and paralysis caused by the protest had made life intolerable for them.

The dispersal “had to happen. There was no other way,” said Omar Hamdi, 23.

“The people here couldn’t live and what happened was inevitable,” he told AFP.

But Ali Abdul Haq, 57, said the methods used were a mistake.

“It was a shame. They should have used their wisdom,” said Abdul Haq, as he and his wife stepped over shards of broken glass.

“People chose a president and voted for him. How can throwing away their votes be that simple?” he asked.

Metres away, passersby snapped picturers on their mobile phones of overturned cars and security vehicles while residents of the area’s residential towers watched from their balconies.

One of them, 73-year-old Samira Zarei, said the protest camp had left her terrified.

“I was so afraid of them storming houses. We heard shooting, I couldn’t go out. I just sat at home with my brother’s wife,” she told AFP.

She slammed the Muslim Brotherhood protesters as “traitors” and said she was relieved the demonstrations were over.

But the whole episode, she said, painted a gloomy picture for the country’s future.

“Never in my life did I imagine that an Egyptian would kill another Egyptian so easily,” she said.