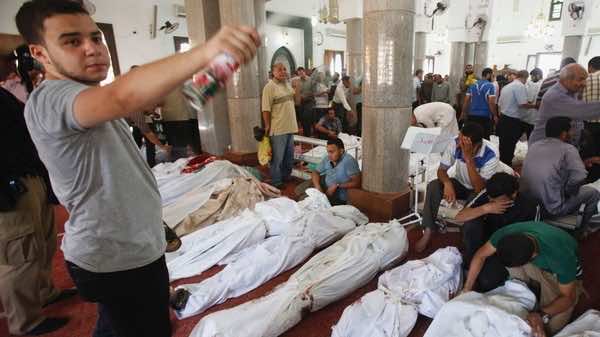 The U.N. Security Council will meet on Thursday to discuss the situation in Egypt as the United States called on its citizens to leave the country after a day of bloody violence.

France, Britain and Australia called for the meeting to discuss the military-backed government’s crackdown on supporters of ousted President Mohammad Mursi.

Egypt’s Health Ministry said 638 people have been killed in the violence so far.

“This is a very serious massacre… against the Egyptian people who were only protesting peacefully,” Erdogan said, criticizing “the silence” of the global community in the face of the bloodshed.

The Security Council will be briefed behind closed doors by U.N. Deputy Secretary-General Jan Eliasson at 5:30 p.m. EDT (2130 GMT), according to Reuters.

Following previous statements of condemnation by the U.S. government and U.S. officials, the United States warned its citizens on Thursday not to travel to Egypt and called on those already there to leave.

Any Americans who remain in Egypt despite the warning were urged to obey all local curfews in place and to avoid street demonstrations.

The warning said that foreigners caught up in the violence could become targets for “harassment or worse” and noted that a US citizen was killed during a demonstration in Alexandria in June.

“Of continued concern is gender-based violence in and around protest areas where women have been the targets of sexual assault,” it added.