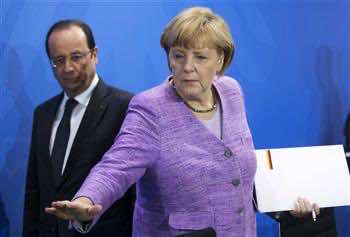 Hollande warned Thursday of the threat of “civil war” in Egypt, after a crackdown by security forces on supporters of ousted Islamist president Mohamed Morsi left nearly 600 people dead.

Both Berlin and Paris had summonsed the Egyptian envoys in their countries Thursday, as did several other EU powers, to condemn the country’s worst violence in decades.

French Foreign Minister Laurent Fabius warned Friday of “a very, very worrying situation” for the entire region and warned of the risk of extremists exploiting the turmoil.

“Egypt is an absolutely critical country in the Arab world,” he said on RTL radio.

More bloodshed was feared as Egypt’s Islamists called for a “Friday of anger”, while the UN urged “maximum restraint” from all sides.