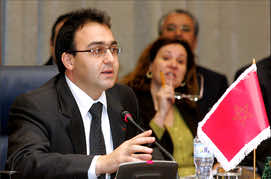 Morocco is looking to restore the image of its parliament.

Having long been criticised by the public for its unsatisfactory performance, parliament has just adopted a new set of internal regulations.

The provisions aim to breathe new life into the work done by the legislative body, House of Representatives Speaker Karim Ghellab told the press on August 7th.

“One chapter of these new internal regulations includes general rules that every MP must obey, such as the primacy of the national interest, independence, responsibility, honesty, attendance and absenteeism, declarations of assets, switches of political allegiance and impartiality when reports are drawn up”, Ghellab said.

Mobile phones are no longer allowed inside parliament, he noted, and every MP has been assigned an email address so that their achievements can be recorded.

Parliamentarians from the governing coalition and opposition agreed that the new regulations would serve as the cornerstone for future improvements to the legislative body.

“Because of a number of cases of outlandish behaviour on the part of MPs and ministers, the Moroccan parliament has lost a lot of the prestige due to a legislative institution,” said Mohamed Nassimi of the Socialist Union of Popular Forces (USFP) youth section.

It is up to lawmakers to “set a good example of rigour and responsibility, otherwise the new internal regulations will be meaningless”, he told Magharebia.

Citizens voiced doubt about the move.

“I don’t think these new regulations will change anything, because if anything needs to be changed, it’s the attitude of politicians,” Casablanca law student Malika Badr said.

Her friend Najat Sakki feels the same way: “In addition to the changes, they also need to introduce penalties for all of these MPs who don’t fulfil their commitments to the public.”

Reform of the Moroccan parliament is urgent, academic Adib Ezzaouali said, adding that it would help put Morocco’s 2011 constitution into effect.

“And to look at it from another point of view, this reform of parliament is now necessary to improve its performance and its image in the eyes of citizens,” he said.

The new version has also added the integration of the Amazigh language to the work of the Chamber, through the deployment of adequate human and financial resources.