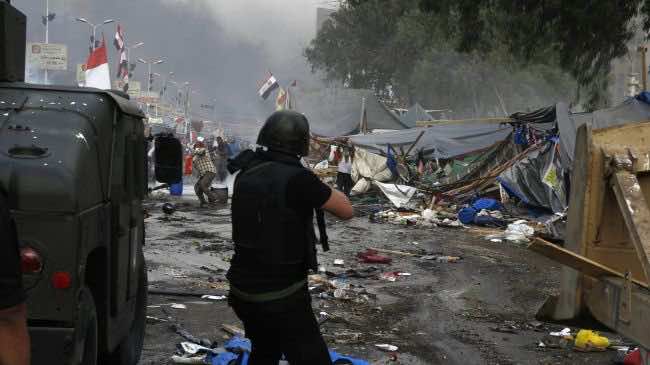 Hundreds of Muslims demonstrated in Indonesia and Malaysia on Friday against a crackdown on the protest camps of Egypt’s Islamists which left almost 600 people dead.

It came as Cairo braced for more protests after supporters of Mohamed Morsi, ousted as president in a military coup last month, called for a “Friday of anger”, and the UN urged “maximum restraint” from all sides.

In the Indonesian capital Jakarta, about 1,000 protesters converged on the United States embassy after Friday prayers.

US President Barack Obama has cancelled a joint US-Egyptian military exercise but has stopped short of suspending Washington’s billion-dollar aid to Egypt.

They brandished placards reading “Stop Egypt Massacre”, “Jihad for Egypt” and “Stop Killing” outside the mission as scores of riot police stood guard.

“We have witnessed such cruelty,” one protester shouted through a loudspeaker, while others responded by shouting “God is Great” in Arabic. “God, please shows us ways to fight back.”

At a demonstration of several hundred people at the landmark Hotel Indonesia roundabout, protest organiser Arief Aditya said: “As Muslims we feel a connection to those in Egypt.” Indonesia is the country with the world’s biggest Muslim population.

“The Egyptian military is using inhumane tactics against protestors,” added Aditya, who is the head of the Islamic Organisation at the University of Indonesia.

In the Malaysian capital Kuala Lumpur, about 500 Muslims protesters gathered after Friday prayers outside a major mosque in the suburbs to denounce the crackdown.

Protesters held posters that read “Respect the people’s choices, not the coup,” and shouted in unison “Long live Morsi!”

“We want the world to urge the UN to stop the killing,” said Khairudin Abas, a protest organiser with Muslim group ABIM.

The NGO organised similar protests at other major mosques in several states around Malaysia, along with the country’s opposition Islamic political party and other groups.

“We want the military to stop the killing and return power back to Morsi, the democratically elected president,” he told AFP.

The protesters in the Indonesian and Malaysian capitals dispersed peacefully later in the afternoon.

Both the Indonesian and Malaysian governments have expressed deep concern over events in Egypt, with Malaysia urging its citizens to defer non-essential travel to the country.

Egyptian officials have said 578 people were killed in Wednesday’s clashes, the country’s bloodiest day in decades.