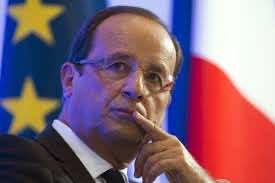 France and Germany called Friday for urgent European talks on cooperation with Egypt as concern grew over a bloody crackdown on supporters of ousted Islamist president Mohamed Morsi.

In a statement, French President Francois Hollande and German Chancellor Angela Merkel raised the spectre of the European Union rethinking its cooperation with Egyptian authorities, as at least 12 people were killed in fresh violence on Friday.

“Egypt must return as quickly as possible to the path of its democratic life,” Hollande and Merkel said in a statement after telephone talks.

“The president and chancellor also called for urgent consultations at the European level,” it said.

“They want the Union’s foreign ministers to meet quickly, next week, in order to take stock of cooperation between the European Union and Egypt, and to develop common responses.”

Hollande was also due to discuss Egypt with British Prime Minister David Cameron in a telephone call later on Friday.

The European Union has already said that senior officials from its 28 members will meet Monday to review the crisis in Egypt, where a military crackdown has left hundreds dead.

The meeting will look at the situation in Egypt ahead of a possible meeting of EU foreign ministers, EU foreign affairs chief Catherine Ashton’s office said on Twitter.

The next scheduled meeting of EU foreign ministers is in the Lithuanian capital, Vilnius, on September 6 and 7.

But momentum seemed to be building for top-level talks sooner,  with French Foreign Minister Laurent Fabius warning Friday of “a very, very worrying situation” for the entire region.

“Egypt is an absolutely critical country in the Arab world,” he said on RTL radio.

Germany condemned the violence “in the strongest terms”, Merkel’s spokesman Steffen Seibert said, calling on all sides “to act peacefully and refrain from any use of violence”.

Spain’s foreign ministry also summoned a senior diplomat of the Egyptian embassy in Madrid on Friday, saying in a statement: “Avoiding more bloodshed and respecting the human rights of all citizens should be the priority of the transition government.”

International concern has been growing since 578 people were killed in clashes on Wednesday as police cleared pro-Morsi protest camps in Cairo and elsewhere in the country, in Egypt’s bloodiest day in decades.

The army-installed government that took over following Morsi’s ouster on July 3 has imposed a state of emergency and night-time curfews.

The UN Security Council on Thursday urged all parties in the crisis to exercise “maximum restraint” after an emergency meeting in New York.

US President Barack Obama announced Washington was cancelling exercises with Egypt’s military to protest the killings, but stopped short of suspending $1.3 billion in annual aid.

The United States has carefully avoided calling Morsi’s ouster a coup, a designation that would require Washington to cut assistance. Egypt has been one of the biggest recipients of US aid since it signed a peace treaty with Israel in 1979.

The EU has pledged nearly five billion euros in loans and grants for Egypt for 2012-2013 and said shortly after Morsi’s ouster that aid provisions would be “under constant review” as the situation evolved.