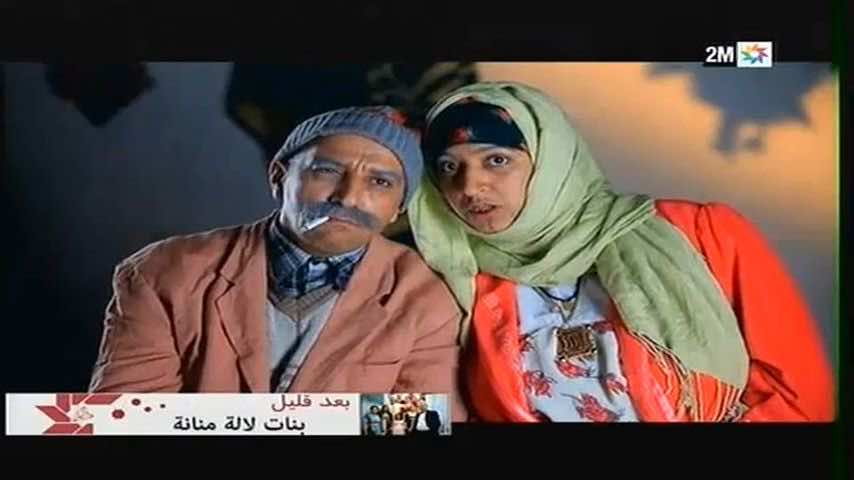 The most recurrent leitmotif that comes to the fore in public discussions about Moroccan Ramadan soaps is the exorbitant funds invested in these productions, which for a number of Moroccans is sheer waste of tax-payers’ money. It is no surprise, then, that a number of Moroccans called for the boycott of these soaps on social media, particularly Facebook.  However, what these critics tend to overlook is the fact that this year’s Ramadan soaps are the conduit for the representation of new gender roles, questioning the traditional representation of women in the Moroccan media in general and soaps in particular . Following this, in this article, I will look into three Ramadan soaps and the way they partake in the representation of women as active social agents, contributing to the portrayal of women under hitherto new guises. The three Moroccan soaps in question are: Dour Biha ya Yachibani (Marry her old man!) , Bnat Lalla Menana (Mrs Mennana’s daughters)and lkouble, (the couple). I aim to address the following two questions: In what way do these Ramadan soaps contribute in unsettling the strict gendered roles imposed upon women in a traditional society where a patriarchal system is very much entrenched? Second, to what extent do these TV fictions present alternative visions and possibilities for Moroccan women?

A man courting a woman in the presence of her father, another man being kicked out of the marital household and a young woman being courted by two would be suitors just at the doorsteps of her house are not scenes taken from the sort of soap operas made in the USA. Rather, it is a Moroccan-made soap directed by Nabil Ayouch and shown during Ramadan, a month known for the influx of soaps compared to the rest of the year. Dour Biha ya Chibani ,which is also the title of a song by the infamous Algerian Rai singer Cheb Khaled, is the story of Mr. Bouzarouk. After retirement he falls victim to a mid-life crisis when existential questions about life, relations and family become very pressing. The situation become so taxing that the protagonist starts seeing apparitions of his defunct father. To escape depression and pointlessness usually concomitant to retirement, he embarks upon a quest for another wife, which ends up being full of comic twists and absurd situations. The depression and sense of powerlessness in the male protagonist starkly contrasts with the wife whose desire for self-fulfillment and independence prompts her to start a medicinal herbs shop.  This is indeed a far cry from the traditional representation of women in Moroccan TV fiction as powerless, dependent and emotional. Starting a business is by no means an evident undertaking since it requires ample calculation and entrepreneurial logic. Traditionally, Moroccans’ first viewing reaction to any piece of televisual fiction, be it a film, a soap or a series, is to make out who lwald is. In Moroccan Arabic, lwald means ‘boy’ and in the context of viewership it designates the male protagonist around whom the plot of the narrative centers. Moroccans never look for a female protagonist. Rather, it is the male gaze, power and presence that gives viewing its meaning and purpose. It is this patriarchal paradigm in TV fiction consumption that this sitcom unsettles. Another instance that reinforces the depiction of women as active agents capable of bringing in social change is discerned in the very telling scene when a female doctor is giving a group of wives a lesson on the risks of breast cancer, a real public health issue in Morocco, which does not go without arousing the husbands’ suspicion of a conspiracy being made against them. In fact, it is a cogent testimony to the fact that whenever women try to take responsibility of their bodies, male authority is challenged. The discussed scenes above bring to the fore the power dynamics governing the male-female interaction in Moroccan society. They provide on example of how Ramadan soaps this year highlighted women’s visibility and consequently facilitated a palpable matriarchal narrative that serves to challenge an uncompromising patriarchal system.

This soap is the story of a widow and, interestingly enough, the mother of three daughters whose family house is coveted by a crook who does everything he can to get his hands on the family house. The setting of the story in the north of Morocco should by no means go unnoticed. If there is one characteristic that marks society in this area of Morocco it is its rampant conservatism compared to other regions in Morocco. This undoubtedly gives much more edge to Mrs. Mennana’s resistance to the patriarchal hegemony in this part of Morocco. It is not easy to be a woman in the north of Morocco, let alone defy male dominance. The lives of these women are the site where resistance to the patriarchal prerogatives is a daily struggle. However, they by no means surrender to the pressure to sell the family house. Although the common denominator of the lives of these women is to achieve independence and agency in a male-dominated society, they pursue different paths to achieve their goal.

The eldest daughter is the perfect incarnation of a self-made woman who has no qualms with candidly voicing her opinions and condemning injustice. The beauty of her sharp jaw, high cheekbones, and sparkling eyes does nothing to lessen her defiance of a husband who left her after suspicions of adultery. Against all the odds, she decides to work selling smuggled goods from the Moroccan occupied city of Ceuta, where she has to face harassment and exploitation. She never shows signs of giving in to any sort of pressure or surrendering to the male desires of her boss. Indeed, she is the epitome of the self-made woman poised to resist male domination no matter how stringent social controls are. This pales in comparison with the stereotypical portrayal of women in Moroccan TV fiction as frail, downtrodden creatures lamenting their lot and desperately seeking refuge under male protection.

The women in Lalla Mennana are defiant, resisting the patriarchal lure of male protection. Such defiance is even taken a step further when one of the male characters disguises as a woman to talk to one of Mennana’s daughters. This narrative hints at conceptions of transgender and the fluidity of sexuality. It also attests to the power of women to influence the actions and behavior of male characters. In a sense, these instances demonstrate the extent to which women have become empowered to be on a par with men and by extension throwing into disarray the supposedly male authority. By challenging gender roles they emphasize the fluidity of sexuality and how the male dominated narrative is a social construction that can and should be challenged in order to finally illustrate women’s agency and power.

“The Couple”: Rural is Powerful

The piece of fiction that best exemplifies the idea of equality is undoubtedly the widely popular sitcom named “lkouble”, (The Couple). The three-minute sitcom is a combination of witty and humorous exchanges that punctuate the daily life of a Moroccan couple deep inside Morocco’s social fabric For one thing, the rural setting is by no means a coincidence. It pinpoints the fact that, far from being mere male accessories, rural women in Morocco are capable of voicing their opinion, albeit humorously, and challenge the tendency that reduces them to silent, passive beings standing at the receiving end of the patriarchal institution. On numerous occasions, the female protagonist is represented as always having the upper hand in family matters and decision-making, while the male protagonist is constantly on the defensive. My imagined detractors would argue that such representation goes hand in hand with the stereotypical portrayal of women as cheeky and cunning. To proffer such an argument is not to take into consideration the deep-rooted patriarchy in Moroccan rural society where the mere voicing of one’s opinion is frowned upon, if not denied.

While Moroccan Ramadan soaps typically offer the opportunity to lampoon Moroccan TV production as being mediocre and low-brow, they are nonetheless an avenue to promote women’s visibility in the public sphere. Such advancement is reinforced where their resistance to traditional representations is highlighted. In order to ensure a greater appreciation of women’s power and agency, such campaigns must continue to be pursued in the media and other channels.