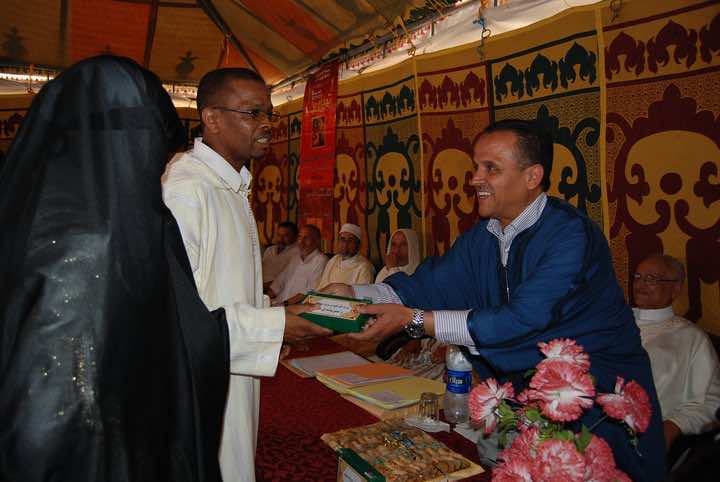 Every year, during the summer holidays, a collective wedding ceremony is held along with other annual festivities of Tifawin in Tafraout, a southern city, and its outskirts. According to the organizing committee, only ten couples are selected to benefit from the ceremony on the basis of some conditions described below. A number of people from many parts of Morocco attend and take part in celebrating this exotic and cultural ceremony.

Of the Tifawin festivities, the most remarkable and interesting of all is the mass wedding which youth of the region take advantage of to marry for free and receive a sum of money on this occasion to support themselves during the first three months of their married life. The initiative was mainly aimed at encouraging and motivating the unmarried youth to marry.

The collective wedding in Tafraout is very different from that of other parts of the world. Here, when a man and a woman agree to marry, their wedding is characterized by several rites and traditions. During the mass wedding, brides, for instance, do not show their faces to the public; they cover them with a chic, red piece of clothing, and they dress the rest of their body in black. The black clothing must not be comprehended as gloomy. On the contrary, the black dress of the region has long been regarded as fashionable. As for the grooms, they wear white Jellabas and yellow slippers.

This year’s mass wedding ceremony, which takes place on Saturday, August 18th, is multi-dimensional. It can be seen as an incentive for young men and women to marry so as to avert today’s temptations and to preserve their chastity. It can also be seen as a sign of solidarity with and support for the youth who are obsessed with a phobia of marriage and future.

“This is a golden opportunity of our youth to start their families. It is our duty to support them financially and morally,” said Lahcen Hssaini, president of the Tafawin Festival Association.”

“It is also an opportunity for us to expose to the world our exotic wedding traditions that are characteristic of the region,” he added.

“Thanks to this initiative, I finally got married. We have been offered pats on our shoulders and supported by our families, friends and relatives to settle down. The initiative motivated us to marry,” one of last year’s beneficiaries from the mass wedding told MWN.

So far, the initiative has proved a great success, and it has been warmly hailed by many key regional figures because of the social and cultural dimensions pertaining to the ceremony. For example, at the social level, the initiative targets the needy of the region through strengthening the social ties of their everyday lives.

At the cultural level, the initiative has been meant to contribute to the eradication of some dangers of sexual relations among youth, a recently growing phenomenon in Tafraout. Also, at a time when destructive signs of modernization are permeating every corner of this conservative region, many believe that the initiative of the collective wedding is the solution to alleviate many negative behaviors. Among the latter are get-togethers that men and women traditionally hold in Tafraout.

For anyone desiring to benefit from this mass wedding, several conditions must be met:

1) One of the spouses must originally be from the region of Tafraout.

2) The marriage contract must be signed on the day of the wedding.

3) Submission of some administrative documents, such as the celibacy certificate, marriage permission, medical certificate, birth certificate and a copy of the national identity card.

For the ceremony beneficiaries, they are awarded 10,000 DHs and coverage of the marriage contract expenses.