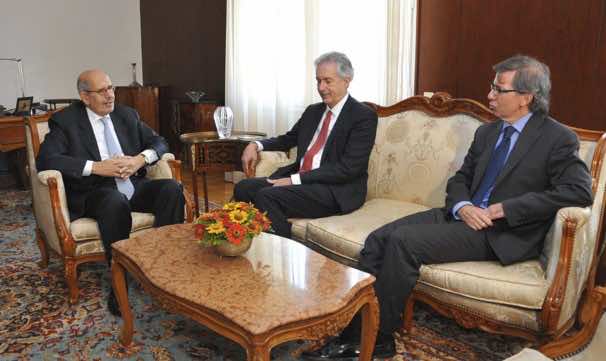 The United States and its European and Gulf allies were close to a peace deal two weeks ago between Mohamed Morsi supporters and Egypt’s military, The Washington Post reported Saturday.

The deal called for supporters of the ousted president to abandon their street camps in exchange for a promise of non-violence from the authorities, the Post said, citing Bernardino Leon, the European Union’s envoy for Egypt.

The peace deal, which also included a probe into competing claims of violence, was supposed to lead to talks between the interim government and the Muslim Brotherhood, but former vice president Mohammed El-Baradei apparently could not convince army chief General Abdel Fattah al-Sisi to agree, Leon told the paper.

El-Baradai resigned in protest on Wednesday as the government unleashed a bloody crackdown on the protesters.

The proposed deal, according to the Post, came after weeks of visits to Cairo and lobbying by diplomats including Leon, US deputy secretary of State William Burns, and the foreign ministers of Qatar and the United Arab Emirates.

“It was a quite simple package the four of us were supporting,” Leon told The Post.

The two Gulf states, along with Saudi Arabia and Kuwait, are sending more money to Egypt than the United States is, officials told the newspaper. Qatar has especially emerged a leading supporter of the Brotherhood, according to the Post.

“It’s natural that we would have interacted with these countries because they are the ones that are playing, that have strong relations, in Egypt,” a senior US official told the paper, speaking on condition of anonymity.

Protesters in Egypt planned fresh marches after street battles left more than 80 dead on Friday, and resulted in the arrest of more than 1,000 alleged Muslim Brotherhood supporters.