Casablanca- The Arab Spring was able to sweep away a number of regimes in the MENA region. Some collapsed on the spot while others resisted for a limited period of time. Others are still resisting, but likely to fall sooner or later. 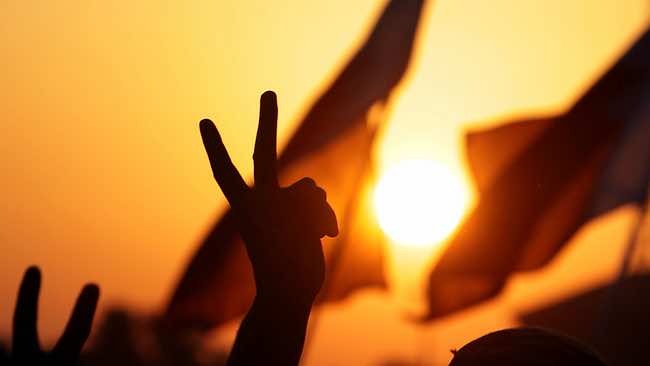 By
Jamal Saidi
-
Jamal Saidi is an English teacher.
Aug 17, 2013
Spread the love

Casablanca- The Arab Spring was able to sweep away a number of regimes in the MENA region. Some collapsed on the spot while others resisted for a limited period of time. Others are still resisting, but likely to fall sooner or later.

Dealing with the unprecedented change in the mindset of people who suddenly awakened their ability to shake the ground of republican and royal palaces, Arab presidents and kings found themselves in an open battle with citizens who were yearning for democracy and freedom. After two years, only the fittest, not the strongest, among the regimes could survive.

Morocco and Syria, being the subject of this article, witnessed a smooth transition of power at the turn of the century. During decades of the last century, both Hafez Al Assad and Hassan II repressed their opponents. However, the latter called for reconciliation and established the Advisory Council on Human Rights. He released hundreds of political prisoners and allowed the ratification of several human rights conventions.

Regardless of external political factors, Bashar Al Assad and Mohamed VI are two young leaders who adopted two different approaches which yielded two different results. Morocco is still preserving its stability. Syria is becoming a ghost country where the line between life and death is very thin.

The excessive use of power had always been an efficient way to silence angry Arab streets. Manifestations against authorities in the Arab world had taken place numerous times throughout the last century. Thousands of people protested at the heart of Arab cities to denounce a particular action of their governments. Subsequently, confrontations would result in killing and imprisoning thousands.

In 1982, the scenes of the Syrian city of Hama were the result of the bloody crushing of a Sunni rebellion. After the violent clashes, an estimated 20,000 people were killed.. A large portion of the Syrian people would never forget the atrocities of this massacre. During his reign, the then-president Hafez Al Assad did not take significant steps to heal the wounds of the past. He could go away with his crimes. However, he was obviously more intelligent than his son, the current president, in the sense that he adopted the security approach in the nineteen-eighties of the last century and during the Cold War between Western and Soviet alliances, but not in the era of ongoing popular uprisings in the region.

One can find similar events throughout the Middle East and North Africa. During the seventies, Morocco witnessed years of repression, known as years of lead, due to two attempted military coups. Thousands of citizens were arbitrarily detained, tortured or ‘disappeared.” Response to protests and strikes caused dozens of civilian deaths, a decade later.

It is a bygone era when Arab leaders survived popular uprising by means of force. The political and social environment in the area has altered dramatically.  Decision makers are supposed to take this development into great consideration if they wish to save their regimes, and most importantly social and political stability of their own country. The current events in the region make it crystal clear that those who adapt their reactions to this new context survive the storms of Arab Spring. Others who still stick to the old approach, use of excessive power, are obviously in hot water.

Most of the revolutions started demanding basic rights that could be met through dialogue without having to resort to bloody confrontations that only aggravate the situation, and ultimately lead to the overthrow of regimes. Leaders such as Gadhafi who ruled Libya with an iron fist for more than four decades could not give room for any discussion over his legitimacy. He thought he was too strong to debate with “ al jirdan” or “ rats”. A few months later, Libya turned a page in its history in which Gadhafi had no role to play. He did not survive the crisis because he was far from adapting to the situation. And so is doing Bashar Al Assad.

Bashar is still holding faith in his army to defeat “terrorism”. He believes in strength rather flexibility and dialogue. It is a “win at all costs” mentality. It will lead to nowhere, especially in this particular period of history. The president failed to convince his opponents and, therefore, peaceful protests metamorphosed into an endless bloody war.  The security approach of the Syrian regime has germinated into thousands of lost lives, millionsof refugees and a devastated country.

Mohammed VI has always been insightful, flexible and ready to take the right action at the right time. The way he managed to survive the storms of the Arab Spring is very telling.  He introduced unprecedented constitutional reforms, ceding control over many public institutions to an elected government.  His initiatives fit well into the needs of the situation in that the reforms addressed the most urgent political demands. Since the royal speech of March 9th, 2011, followed by parliamentary elections, Morocco has been comparatively enjoying greater stability.

Two weeks ago, the king’s flexibility continued to take place through a crisis caused by a royal pardon granted to a convicted Spanish pedophile. The moments were very critical and observers said Mohammed VI faced the most dangerous 72 hours of his reign. Moroccans felt outraged and angry protestors took to the streets of various cities, demanding that the pardon be revoked.  At a certain moment, one would think that the kingdom’s stability was at stake. Once again, the king managed to avoid the storm. He took immediate courageous steps when he rescinded his pardon, received the victims’ families and most importantly fired prisons chief Hafid Ben Hachem. After the aforementioned decisions, protests became irrelevant and Moroccans seem to be satisfied.

One can, therefore, rest assured that Morocco’s stability and monarchy are in safe hands.

Conversely, Syria has reached the point of no retune. On the battle field, Bashar al Assad‘s army appears to be strong, but the president is far from being able to survive. The reason is that Darwin’s famous phrase the survival of the fittest holds true in politics as well: The survival of the most adaptable!