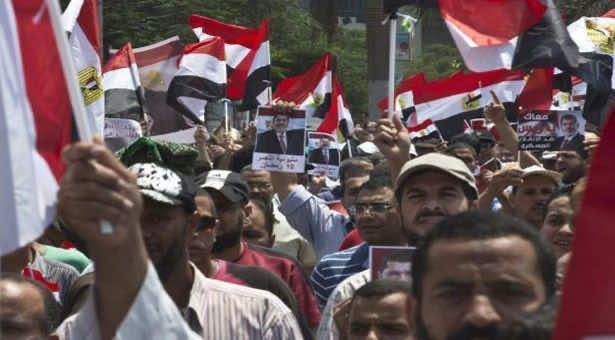 Thousands of Arab supporters of the Islamic Movement in Israel demonstrated on Saturday in support of Egypt’s ousted Islamist president Mohamed Morsi, an AFP correspondent said.

Around 4,000 people led by firebrand preacher Sheikh Raed Salah, head of the northern branch of the Islamic Movement, took part in the protest in the northern city of Nazareth, the correspondent said.

The demonstrators marched holding Egyptian flags as well as pictures of Morsi and chanting against Egyptian army chief Abdel Fattah al-Sisi who led the overthrow of Morsi, claiming he was “taking orders from the USA”.
A police spokeswoman said the demonstration passed without event.

Pro-Morsi rallies took place on Friday in Jerusalem’s Old City and in the West Bank city of Hebron, attended mostly by supporters of the Islamist Palestinian Hamas movement.

Some of the participants in the Friday rallies accused Sisi of collaborating with Israel, where officials have refrained from commenting on the events in Egypt.