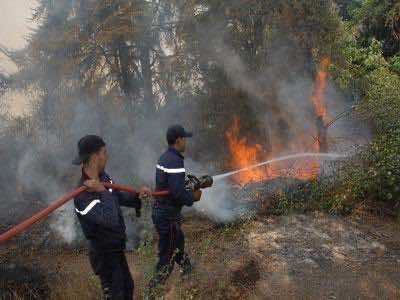 Police services in Agadir, (153 miles south west of Marrakech), recently arrested a teenager allegedly responsible for the massive fire that devastated 1300 hectares of trees in Amskerod forest, according to news outlet Goud and other Moroccan news sources.

Investigations eventually unveiled that the person behind the massive fire that ravaged 1300 hectares of mainly Argan and olive trees was actually a 16-year-old teenager.

After being questioned by police officers, the suspect admitted to lighting the first sparks of fire that took days to be extinguished.

The suspect also told police services that he lit the fire at Amskerod forest because of the process of bee keeping.

Unfortunately, the minor did not know that the hot weather that day and the nature of the green space were sufficient factors to make the smallest fire propagate in a blink of an eye.

The 16-year-old was subsequently referred to the primary court in Agadir, and then referred to the juvenile court where he was accused of igniting a fire with tremendous damages.

He is now in detention at Inzigan local prison until further investigations are conducted.

The Minister of Interior, Mr. Mohand Laenser, has announced today that the process of extinguishing Amskerod’s massive fire is almost done, according to Daily Akhbarona.

“We can say that the fire is under control now,” Mr. Laenser was quoted as saying by Akhbarona. “Yet, we have to stay vigilant,” he added.