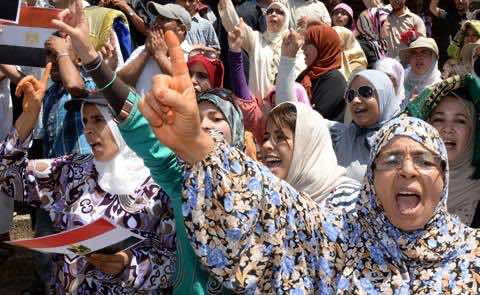 Around 10,000 people took part in a demonstration in the Moroccan capital on Sunday in support of Islamists in Egypt locked in a deadly showdown with security forces.

The crowd carried banners condemning the police operations that have cost hundreds of lives among demonstrators demanding the reinstatement of Egypt’s army-ousted Islamist president Mohamed Morsi and posters showing the dead in
makeshift morgues in Cairo.

“Soldiers should be carrying out their duty of protecting the nation’s territory instead of killing their own people,” said Driss Leghroudi, a 33-year-old academic.

“History is repeating itself. It happened in Algeria in 1992 (with its civil war) … It’s Saudi Arabia which is behind it” in Egypt, he charged, as the crowd chanted for the expulsion of the Egyptian ambassador to Morocco.

Morocco initially adopted a neutral stand after last month’s toppling of Morsi but the authorities in Rabat have since expressed alarm over the carnage resulting from a security crackdown to remove Morsi’s supporters from the
streets.

More than 750 people have been killed in violence across Egypt since Wednesday, official figures show.