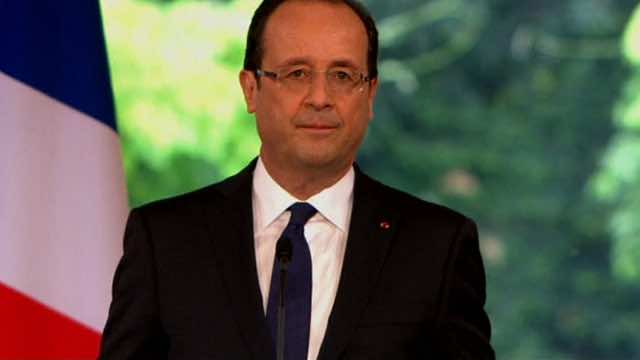 French President Francois Hollande on Sunday condemned the “unacceptable” level of violence in Egypt, calling for dialogue and swift elections, after a meeting with the Saudi foreign minister.

“It is unacceptable that there is violence of this level in a great country like Egypt,” said Hollande. “If the freedom to protest must be respected, so must security.”

The French leader said all countries that had “a relationship of trust and friendship” with Egypt had a duty to do everything in their power to stop the violence, to allow for political dialogue and rapid elections.

He said Arab nations, Europe and France had a “shared responsibility” to get Egyptian political authorities to take a roadmap towards elections that was agreed upon after the July 3 ouster of president Mohamed Morsi.

Hollande said France was “concerned by the violence and the deaths, which have been too numerous” in a bloody crackdown on Morsi loyalists by security forces which has left more than 750 dead.

Saudi Foreign Minister Prince Saud al-Faisal said he had brought a message from King Abdullah, who on Friday pledged his support to the Egyptian military’s fight against “terrorism”.

Faisal said he understood that the freedom to protest was a right, but underlined that “in return, protesters must not threaten the lives of other citizens, property, or turn to violence.”

“It is not insignificant that 30 million Egyptians took to the streets to demand that their authorities guarantee their security and organise early elections,” he added.

Faisal also urged a quick return to the roadmap.

Referring to European Union plans to “review” ties with Egypt, the Saudi foreign minister said: “It is not through threats that we will achieve anything.”