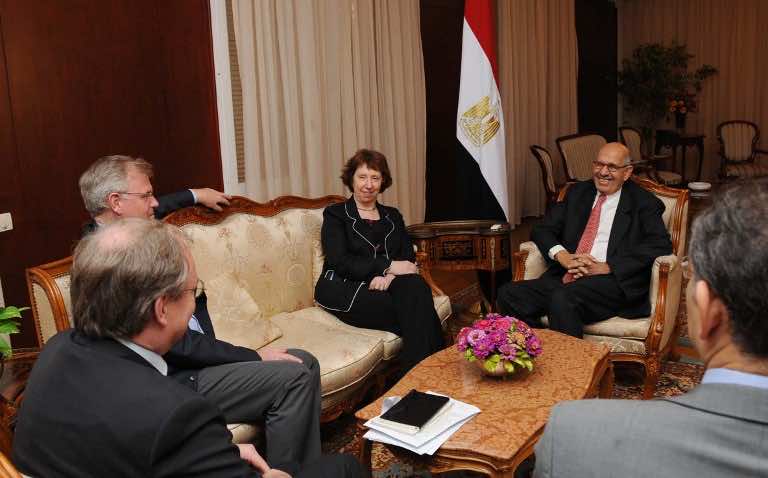 The European Union held a first round of emergency talks Monday on the spiralling bloodshed in Egypt amid warnings the bloc was ready to “urgently review” ties with the country.

Ambassadors on the bloc’s Political and Security Committee were called away from their summer break for talks in Brussels that kicked off Monday morning after the death toll from five days of violence in Egypt climbed to almost 800.

Warning that further escalation could have “unpredictable consequences” for Egypt and its neighbours, the presidents of the European Council and European Commission said in a rare joint foreign affairs statement issued on the eve of the talks that the 28-nation bloc will review its relations with Cairo.

“Recent developments in Egypt, and more particularly the violence of the last days, are extremely worrying,” Herman Van Rompuy and Jose Manuel Barroso said in a joint statement.

“It is crucial that violence ends immediately,” they added.

“The EU will urgently review in the coming days its relations with Egypt.”

At stake is nearly five billion euros ($6.7 billion) in loans and grants promised by the world’s top aid donor to Egypt for 2012-2013. It includes one billion euros from the EU with the rest from European banks the EIB and EBRD.

EU aid however has been made contingent on political and judicial progress so no new direct budget support has been approved for the Egyptian government since 2012 due to a lack of reform.

Despite talk in some European capitals of suspending aid or slapping sanctions on those responsible for the bloodshed, an EU diplomat speaking on condition of anonymity said Monday’s talks would be “less of a decision-making meeting, more a question of looking at the next steps.”

One concrete outcome is expected to be a snap meeting within days of the EU’s foreign ministers, who were not scheduled to meet until early September and have not met since July 22, when they urged Egypt’s army to stand aside and allow a peaceful transition to civilian rule.

In their statement, Van Rompuy and Barroso urged an end to the violence, a resumption of political dialogue, and a return to democracy.

“While all should exert maximum restraint, we underline the particular responsibility of the interim authorities and of the army in bringing clashes to a halt,” they said.

“The calls for democracy and fundamental freedoms from the Egyptian population cannot be disregarded, much less washed away in blood.”

The EU’s special envoy for Egypt, Bernardino Leon, will brief the EU diplomats. He told the Washington Post this weekend that the United States and its European and Gulf allies were close to a peace deal two weeks ago between supporters of ousted president Mohamed Morsi and Egypt’s military.

The deal called for supporters of the ousted president to abandon their street camps in exchange for a promise of non-violence from the authorities.

It was supposed to lead to talks between the army-installed interim government and Morsi’s Muslim Brotherhood, but army chief General Abdel Fattah al-Sisi could not be convinced.

Leon, US Deputy Secretary of State William Burns, and the foreign ministers of Qatar and the United Arab Emirates spent weeks seeking a compromise in Egypt.

Last week’s bloodbath has provided fresh momentum to such efforts. French President Francois Hollande and Merkel last week raised the spectre of the EU rethinking its cooperation with Egyptian authorities.

As tourism revenue dries up and European firms close Egyptian plants due to the violence, Denmark last week announced it was suspending development projects taking place in direct collaboration with the government and with public institutions.

Not so wise to suspend that right now.”