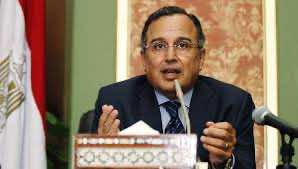 Egypt is on the “right path”, interim foreign minister Nabil Fahmy said Monday in Sudan on his first trip abroad, after hundreds died in clashes between Egyptian Islamists and security forces.

“Yes there is a crisis but we are on the right path and I believe in the future,” he said after talks with his Sudanese counterpart Ali Karti.

Fahmy said Egypt will push ahead with its “roadmap”, an army-drafted plan providing for elections in 2014.

“Our top priority is the national security of Egypt,” he said.

“The coming Egyptian political system will be a democratic, open regime and open to all according to constitutional rules that will be written soon.”

Anyone resorting to violence will be held to account “under the law”, and will be left out of Egypt’s future, he added.