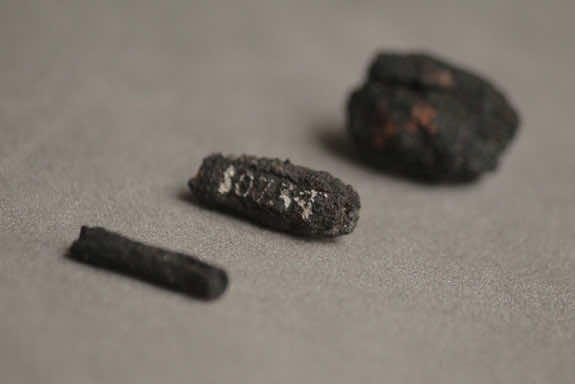 The earliest iron artefacts ever found — funeral beads strung around bodies in a 5,000-year-old Egyptian cemetery –were made from a meteorite, archaeologists said on Monday.

Hi-tech scanning of the beads, discovered by British archaeologists in the Lower Egypt village of el-Gerzeh in 1911, shows the metal came from a rock in outer space, they said.

The nine small beads come from two burial sites dated to around 3,200 BC, where they were found in necklaces along with exotic terrestrial minerals such
as lapis lazuli, agate and gold.

They are stored at the University College London (UCL) Petrie Museum.  Meteorite iron is an alloy that has a different composition from terrestrial iron.

The scientists teased out a signature of the elements in the beads through a non-destructive ID test called prompt-gamma neutron activation analysis (PGAA).

Under this, a sample is bathed in low-energy beams of neutrons. Elements in the sample absorb some of the neutrons and emit gamma rays in response, the level of which provides the telltale.

The team found traces of nickel, phosphorus, cobalt and germanium that meant the source could only have been extraterrestrial.

X-ray scanners, meanwhile, showed that the meteorite iron had been repeatedly heated and hammered to make the precious jewels for the afterlife.

This shows that in the fourth millennium BC, the Egyptians were already advanced in the art in smithing, say the researchers.

Meteoritic iron is much harder and more brittle than copper, the commonly-worked material of the time.

“They were rolled and hammered into shape,” said Thilo Rehren, a UCL professor of archaeology.

“This is very different technology from the usual stone bead drilling, and shows quite an advanced understanding of how the metal smiths worked this rather difficult material.”

The study appears in the Journal of Archaeological Science.