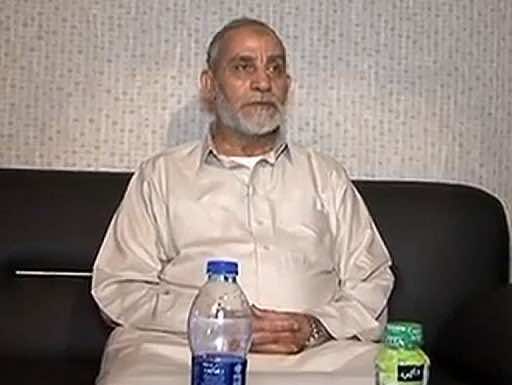 Mohammed Badie, the supreme guide of Egypt’s Muslim Brotherhood, who was arrested Tuesday, was once an advocate of a low profile for the group who eventually embraced it seeking political power.

For years, he argued that the group should focus on social issues and ideological outreach more than political life, but the 2011 uprising that ousted long-time president Hosni Mubarak appeared to change his mind.

Badie was elected to head the Islamist group in January 2010 after a bitter dispute between conservatives, who favored an ideological focus, and reformists advocating a more active public role.

After his nomination, he insisted that the group would seek “incremental reform.”

“That takes place in a peaceful and constitutional way,” he said.

“We reject violence and denounce it in all its forms.”

At the time, analysts saw his appointment as a sign the Brotherhood would shift away from politics.

But the uprising changed the calculus, and Badie embraced the importance of parliament and its role after the Brotherhood won nearly half its seats in elections held in early 2012.

“The elected parliament has the right to take to account all state institutions, including the military institution,” he warned.

He had initially said the group would not field a candidate or support “any candidate who has an Islamic reference” in the country’s first post-uprising presidential election.

But he subsequently endorsed the fielding of a candidate from the Brotherhood’s Freedom and Justice Party — first Khairat al-Shater, and then Mohamed Morsi, after Shater was disqualified.

A veterinary professor, Badie was for years responsible for ideological education for the Brotherhood.

He was appointed for a six-year term, and became the group’s eighth leader since its foundation in 1928.

Born in 1943 in the Nile Delta town of Mahalla el-Kubra, he was jailed for nine years in the 1960s after being accused of belonging to a Brotherhood paramilitary cell that allegedly planned to overthrow the government.

Thousands of Islamists were also imprisoned at the time and influential radical Islamist thinker Sayyid Qutb was executed.

Badie was arrested again in 1999 and sentenced to another nine years by a military tribunal, but served only four.

Diaa Rashwan, an expert on political Islam, said Badie was sympathetic towards Qutb, as were many in the conservative camp’s leadership.

“But he was not one of the most extremist elements,” he said.

“Badie is one of the sons of the 1965 Organization. They were introduced to what was a military organization that preached revolution,” said Abdel Moneim Mahmud, a journalist associated with the group’s reformist wing.

“To be realistic, the organization never actually did anything. But at the end of the day it was the door through which they entered the Brotherhood and they believed in it,” he said.

Badie replaced Mahdi Akef, who resigned before the end of his term after conservative members opposed the promotion of Essam Erian, who is associated with the group’s reformist wing.

After Morsi’s election, Badie continued to offer his public support for his presidency, applauding the adoption of a controversial constitution backed by Islamists.

And after Morsi’s ouster by the military on July 3, following massive demonstrations against him, Badie attended rallies calling for the president to be reinstated.

“Millions will remain in the squares until we carry our elected president, Mohamed Morsi, on our shoulders,” he told a cheering crowd.

Badie had been in hiding since July 10, when the public prosecutor ordered his arrest on allegations of inciting violence that killed protesters outside the Brotherhood’s headquarters in late June.

On Friday, his son Ammar was shot dead during protests in Cairo’s Ramses Square.