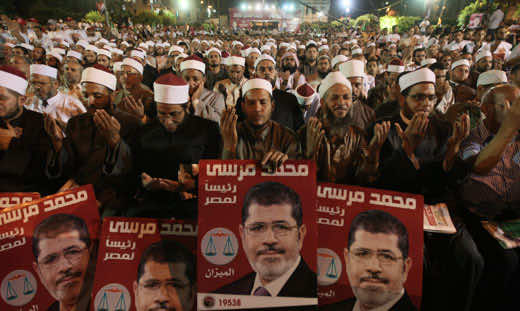 A campaign of repression by Egypt’s government against the Muslim Brotherhood could force the group back into the shadows, once again becoming a clandestine organisation.

A return to the underground could allow the group, which has seen its victorious presidential candidate ousted from office and its top leaders arrested, a chance to regroup and review strategy.

But it could also divide its ranks, with the most radical among its supporters peeling away to become militants, experts say.

For decades, the Islamist group thrived in the shadows in the Arab world’s most populous nation.

In the years leading up to the 2011 overthrow of president Hosni Mubarak, it stepped carefully into the limelight, fielding parliamentary candidates as independents.

But it was only after the uprising that it took centre-stage, winning nearly 50 percent of seats in parliament and then Egypt’s first free presidential vote, which brought Mohamed Morsi to office.

Its fall from grace since has been spectacular, with its top leaders now in jail and hundreds of its supporters killed in clashes with security forces since Morsi’s July 3 ouster by the army after a wave of mass protests.

The group, which “has always been organised like a pyramid,” is now facing “an organisational problem,” said Karim Bitar of the Institute for International and Strategic Relations.

One clear sign of the disarray is the sudden disappearance of the Brotherhood’s media officials, who have gone from reachable at all hours to completely absent.

Another is the dwindling response to calls for the group’s supporters to attend protests calling for Morsi’s reinstatement.

As it faces calls for it to be banned, the Brotherhood has “familiar options… including going underground,” said Francois Burgat, director of France’s Institut Francais du Proche-Orient.

“All evidence suggests that the army will succeed in paralysing the decision-making apparatus of the Brotherhood, but will not be able to erase a party that has a solid and longstanding base,” he added.

The Brotherhood has shown its ability to react quickly under tough circumstances, swiftly naming deputy Mahmoud Ezzat to replace supreme guide Mohamed Badie after his arrest on Tuesday.

While it adjusts to its rapidly changing fate, it will eventually have to reconsider the strategy that led to its fall from power, Bitar said.

The Brotherhood will need to undertake “a long phase of soul-searching during which they will need to learn the lessons of the Morsi fiasco,” he said.

Despite winning elections, the group proved “incapable of moving from a culture of secrecy to a culture of government,” he added.

Instead, it displayed sectarian behaviour and tried to “monopolise all the power for fear that it might lose power again.”

But before rethinks strategy, the group will have to reorganise its ranks and its hundreds of thousands, if not millions, of supporters.

“Unless they reestablish order within their ranks, they could see violent acts by individuals or radical fringes… who will ask whether playing the democratic game wasn’t a mistake,” Bitar said.

The spectre of a return to the Islamist violence that swept Egypt in the 1990s has been raised in recent days as the country faces unprecedented violence between Morsi loyalists and security forces.

In the Sinai Peninsula, attacks against police and army facilities have become an almost daily event and 25 policemen were executed by militants on Monday.

The interim government has likened those attacks to the clashes between Morsi supporters and security forces, and labelled its crackdown a “war against terror.”

But that approach could backfire, allowing the Brotherhood to benefit from a new “martyrology,” particularly as several of its top leaders, including Badie, have lost children in the violence.

“They will be able to benefit from being cast as victims even though they were in the process of discrediting themselves while they were in power,” Bitar said.

And despite the strength of the campaign against them, Burgat said there was little to suggest the Brotherhood would not survive.

“They have survived a lot of persecution and always emerged stronger,” he said.