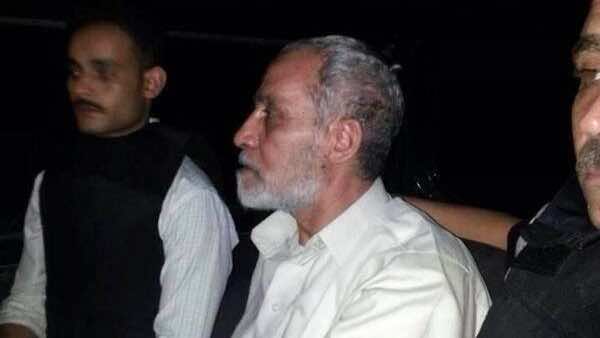 Egyptian authorities detained the leader of the Islamist movement of deposed president Mohamed Morsi on Tuesday, in a move that Washington condemned but without suspending $1.3 billion a year in aid.

The mounting crackdown by the military-installed interim government on Morsi’s Muslim Brotherhood threatened to complicate longstanding US alliances in the region.

Key NATO member Turkey accused Israel of having a hand in the July 3 coup by the Egyptian army, drawing a rebuke from Washington.

President Barack Obama was to hunker with top aides to thrash out US policy in the face of mounting Congressional pressure to break with the Egyptian military.

An Egyptian court remanded Muslim Brotherhood leader Mohamed Badie in custody for 15 days on suspicion of inciting the murder of protesters.

His detention came as the Brotherhood reeled from the imprisonment and killing of hundreds of its members.

Despite its disarray, the Brotherhood moved quickly to name Mahmoud Ezzat, a hawkish deputy in the organisation, as interim supreme guide.

Badie’s detention raises fears of new violence in the Arab world’s most populous state, where nearly 900 people have died in clashes between security forces and Islamist supporters of Morsi.

It is the first time a Brotherhood supreme guide has been arrested since 1981, before president Hosni Mubarak, the veteran strongman ousted in the Arab Spring revolution of 2011, took office.

And it could rally Islamists who have showed up in dwindling numbers in the face of mounting bloodshed and depictions in both state- and privately-owned media as “terrorists.”

The interior ministry said police picked Badie up near Rabaa al-Adawiya square, where more than 280 Morsi supporters were killed on Wednesday as police cleared their protest camp.

It released a video of the 70-year-old, sitting impassively on a sofa, bottles of juice and water placed conspicuously in front of him.

The Brotherhood’s political party said the group had appointed Ezzat to assume the role of supreme guide.

Ezzat has been jailed repeatedly, and is often referred to as the organisation’s “iron man”.

Compared to Badie, Ezzat is a “hawk,” said Karim Bitar, research director at the Institute for International and Strategic Relations.

“In any case, it’s a sign that this is not the time of the moderates in Egypt,” he added.

Violence has rocked Egypt since August 14, polarising the country and drawing international condemnation.

On Monday morning, militants killed 25 riot police in two buses in the Sinai Peninsula, in the deadliest such attack in decades.

Sources said the forces were dragged from the buses and shot execution-style.

The Sinai attack came hours after 37 Muslim Brotherhood detainees died as they were being transferred to a north Cairo jail.

Authorities said they suffocated on tear gas fired by police trying to free an officer the prisoners had taken hostage.

But the Morsi’s Brotherhood accused the police of “murder”.

They said the incident affirmed “the intentional violence aimed at opponents of the coup, and the cold-blooded killing of which they are targets”.

As pressure mounted in Congress for a suspension of US aid, Obama met with national security aides.

The White House insisted that reports it had already cut US assistance to Egypt were wrong — military and economic grants were merely under review.

The Daily Beast news website had reported  US assistance had been “secretly pulled” by the Obama administration.

But White House spokesman Josh Earnest said there had been no final decision on a review of US aid.

“That review that the president ordered in early July has not concluded,” Earnest said.

“Reports to the contrary that suggest that assistance to Egypt has been cut off are not accurate.”

Earlier, an aide to Senator Patrick Leahy, a Democrat who heads the subcommittee on foreign operations, said the flow of aid had been “stopped.”

“This is current practice, not necessarily official policy, and there is no indication of how long it will last,” the aide said.

“What do they say about Egypt: democracy is not the ballot box. Who is behind this? It’s Israel,” said Erdogan.

The White House spokesman described Erdogan’s comments as “offensive and unsubstantiated and wrong.”